The Infinite Friends Machine, created by self-described technologist Tom Armitage, scrapes the fan transcripts of television comedy series Friends and then regurgitates the lines in a procedural manner that can be read by movie-making software Plotagon. 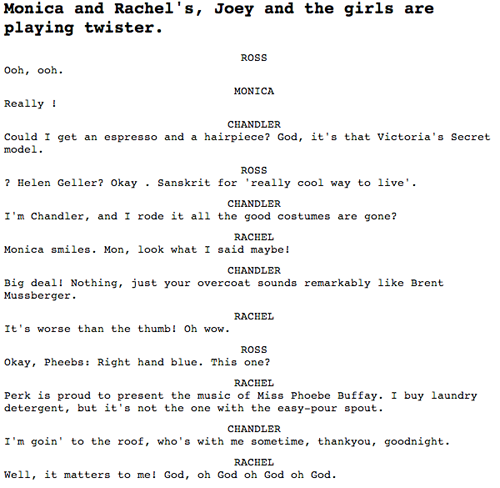 The Infinite Friends Machine currently works for the majority of Friends episodes from season one, and copies the structure of an exist episode transcript in order to produce its own, and then fills in each line of dialogue with a random line from that character. If Chandler and then Phoebe are meant to have a line, then they do, but the lines are randomly chosen. Even so, they will always be something that character said. The end result is a series of nonsensical scripts with even more nonsensical videos attached to them.

Armitage has provided an entire sample script done in this format, and even provided the source over on GitHub.