The internet is a funny old place sometimes. This video has been going around like crazy over the last few days, and seems to be breaking news about the secret kinship of cats & dolphins. And it is cute as all hell. But it’s very much not new. Witness this brief clip, a small section of the same video on some non-English-speaking home videos show, which you can also find on YouTube from 2007:

So it’s been around for a while, though the entire clip seems to have appeared last month. But feline-porpoise encounters are compelling enough, that it seemed worth investigating other examples. Surprisingly most of what I found involves not domesticated kitties, but big game cats with dolphins. Don’t worry, it’s not bloody and still cute. The feline-centric site Kittenspet.com has a couple awesome examples. First here’s a liger cub with a few dolphins (more pix on the site): 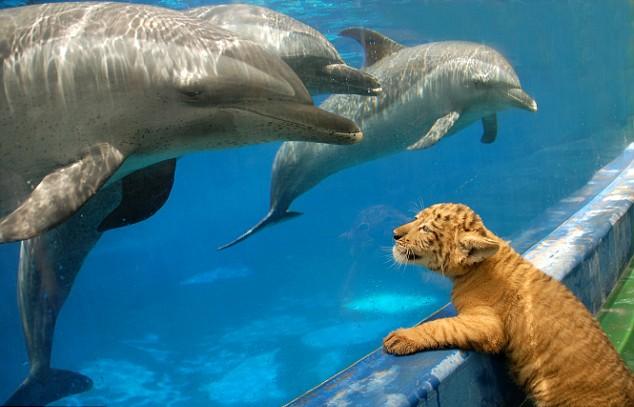 Ligers are what happens when a male lion and female tiger love each other very much (so it’s different than a tiglon, don’t you know). But what about a pure bred tiger and dolphins? Glad you asked, here’s a chance meeting at a zoo between a 6-month-old tiger and some tanked dolphins (more pix on the site): 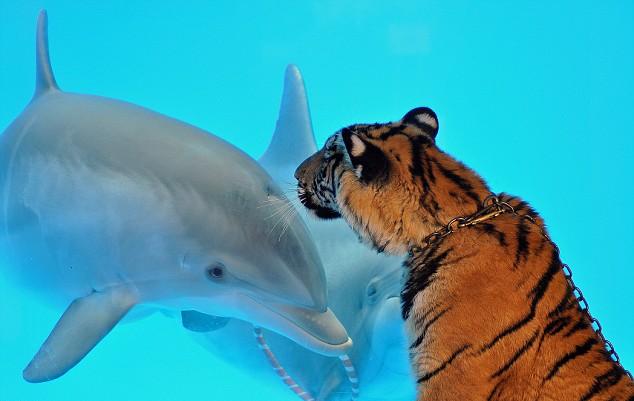 Turns out there’s also a game (also from 2007, hmm) where you have to keep a cat riding on the back of a dolphin: 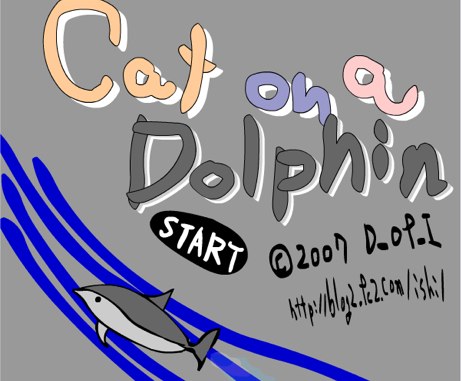 It’s super difficult to play, at least to start playing, at least for me. This article has some tips, if you aspire to go deeper into this dolphin-cat transport endeavor. In a roundup of the remaining examples of the crossovers between these species, there’s also a Taiwanese TV drama called When Dolphin Met Cat, a business tussle between Florida sports teams (Florida Panthers vs Miami Dolphins), and this rather less impressive Cat-Dolphin encounter: