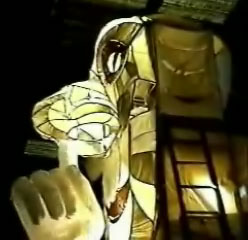 Our friends Tracy Feldstein and Don Bruce have finally finished their masterpiece, “The Disgusting Spectacle”, which is their art installation/performance piece for this year’s Burning Man. Essentially it’s a giant nose picking machine, powered by a human-operated hamster wheel. If you are going to Burning Man this year, I highly recommend checking it out. It’s located in the Plaza at 9:00 and Esplanade.

This is their description of the project:

The Disgusting Spectacle is an enlarged coin-op toy. The “coin” is a 10′ human hamster wheel which will force a hand (with finger extended) into the nose of a 12′ long steel face that has been raised up on 21′ steel tower. Yep, it’s a nose picking machine.

Tracy and Don’s version of The Disgusting Spectacle is based on a 1979 arcade machine created by British engineer/cartoonist Tim Hunkin. Tracy and Don first discovered The Disgusting Spectacle while on their honeymoon in England. For more on Tim Hunkin, check out this excellent video produced by the BBC, which shows Tim explaining some of the humorous arcade machines that he’s created over the years.

Meredith May wrote an article on Tracy and Don’s “The Disgusting Spectacle” for The San Francisco Chronicle back in July: “Impossible dream: Pick the nose on 23-foot head”.