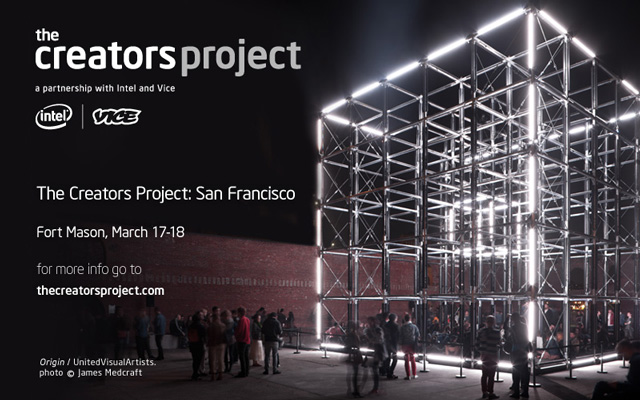 Now in its third year, The Creators Project is hosting its first Bay Area event on March 17 and 18, 2012 at Fort Mason in San Francisco, California. This large-scale technology and arts festival is part of an ongoing global initiative formed by VICE and Intel that supports “visionary artists, musicians, and filmmakers who are using technology to push the bounds of creative expression.” The two-day event will feature “towering multimedia art installations, live music performances, film screenings, and interactive panels.”

We’ll be exhibiting the best of The Creators Project including United Visual Artists’ striking 40-foot by 40-foot audiovisual installation Origin, scored by electronic composer Scanner, Meditation by Minha Yang, Strata #4 by Quayola, Six-Forty by Four-Eighty by Zigelbaum + Coelho, and several new works from our Creators.

On Saturday we’ll be hosting an array of live music performances, and throughout the weekend we’ll be screening films and hosting creative workshops and panel discussions.