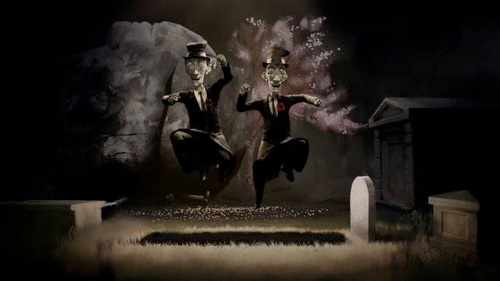 When we say that the Sundance Film Festival 2009, held each January in and around snowy, freezing Park City, Utah has its shorts free on iTunes, we don’t mean the fleece ones Sundance attendees are likely wearing ten pairs of right now to keep their nethers warm. But the “now” part you can interpret literally: for only the duration of Sundance 2009, if you know where to poke, you can find ten free short films from acclaimed directors now showing at the festival. But they expire when the festival does, so you only have until Sunday January 25 to download and watch them.

This year, the festival had a record 5,362 short films submitted; for iTunes they only dished out ten. But the ten they picked are show-offy, to make them look all “we’re Sundance and all our films smell like unicorn farts” — meaning to say, they picked ten excellent films. If you watch only one, absolutely do not miss the computer-animated “This Way Up” by Smith and Foulkes, which I can only describe as vintage “Nightmare Before Christmas” Tim Burton style meets a fast-paced Rube Goldberg comedy of errors starring two undertakers who are having a really bad day. Warning: do not drink liquid while viewing, lest your nose become a latte-sprayer. You can watch the trailer on This Way Up’s official site.

To find them, go to the iTunes store, and look in the left list for “Movies”, then scroll down and look left for their “Genres” list, where you’ll see a little *new* icon on Shorts. Click shorts, then look at the top of the page for the Sundance logo. Strangely then you’ll see your iTunes nav path has you in the “Music” area, but laugh bemusedly to yourself and ignore that, and watch the free shorts. Yeah, it’s *that* not-easy. But worth it.