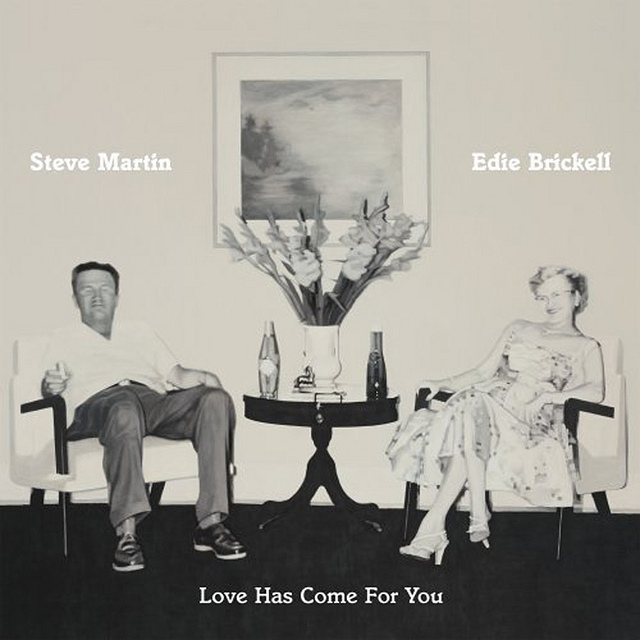 Actor, comedian and banjo player Steve Martin and songstress Edie Brickell (of New Bohemians fame) collaborated on “Love Has Come for You,” a fantastic new rootsy bluegrass album. The duo recently appeared on Late Night with Jimmy Fallon and talked about the album’s unique cover which is based on a photo-realistic painting by the multi-talented Martin Mull.

Steve talks about Martin and the painting, all the while sitting with Edie in a set that looks like the painting. The album is produced by Rounder Records and is available to download at iTunes. They are on tour starting on May 22nd.

Steve Martin is currently in the fifth decade of a varied and accomplished career as a comedian, actor, author and playwright, and as a Grammy®-winning, boundary-pushing bluegrass banjoist and songwriter. His fellow Texas native Edie Brickell initially burst onto the national scene in the late ’80s fronting the New Bohemians, and has since carved out an iconoclastic solo career that’s solidified her reputation as compelling singer and a songwriter of rare insight. Although these new musical partners have already built widely-respected individual bodies of work, their inaugural duo effort is a substantial departure, as a well as a creative milestone, for both artists. Love Has Come for You offers 13 eloquently rootsy Martin/Brickell compositions that combine the former’s inventive, expressive five-string banjo work with the latter’s heart-tugging vocals and vivid, detail-rich lyrics. Produced by legendary musician and producer, Peter Asher, and featuring the guest stylings of Esperanza Spalding, Waddy Wachtel, Nickel Creek alumni Sara Watkins and Sean Watkins, as well as the Steep Canyon Rangers, Love Has Come For You is playful, spacious, and irresistibly accessible.