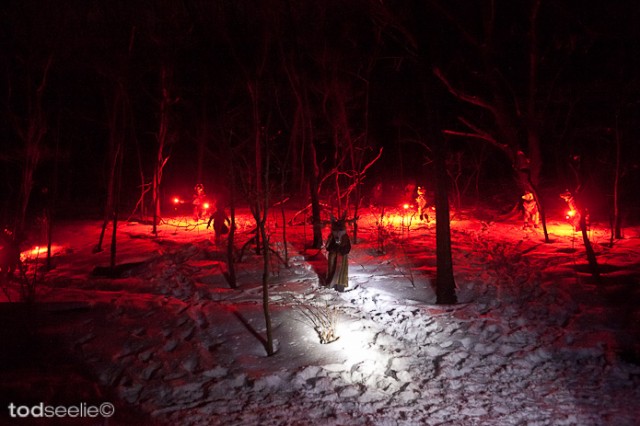 Last Friday, a group of about forty New Yorkers was told to bundle up, pack their flasks and take a night ferry to the borough of Staten Island. The occasion: It was snowing. Once every few years when it’s snowing – so the event organizers’ story goes – the mysterious narwhal returns to its sacred ancestral grounds for a mating dance. This event is so momentous that it disrupts the migratory patterns of all other animals in the area, bringing out mollusks, otters, and other assorted wildlife to partake in the spectacle. The Shadow Parks Department, having discovered this secret ritual site in a remote forest of Staten Island, was inviting adventurers for a viewing.

As the guests were led into the woods, fabulous animals began to emerge – filter-feeding mollusks with dreamily pulsating lights, deers on skis and playful otters, sledding through the audience on copper bellies. Dramatically, bathed in the blood-red light of a dozen flares, a pack of wolves brought down a stray deer. At last, at an abandoned amphitheater in the snow-covered forest, illuminated by a full moon and swaying mollusks, the narwhals performed their hypnotic mating dance.

So how do narwhals actually mate? Some time ago, the artstar and costume designer Sarah McMillan realized that this is just one of the questions that scientists are still researching, and that in general, myths and legends about these creatures still outweigh scientific knowledge. Inspired, she built her first narwhal costumes in 2009 for a Dark Passage event. Last weekend, the “Snow Migration”, staged with the aid of the Madagascar Institute, continued to explore the mystery and poetry of these unicorns of the sea. I have the feeling it’s not the last we’ve seen of them.

Here are more photos of the event by Tom Kirsch and Tod Seelie. 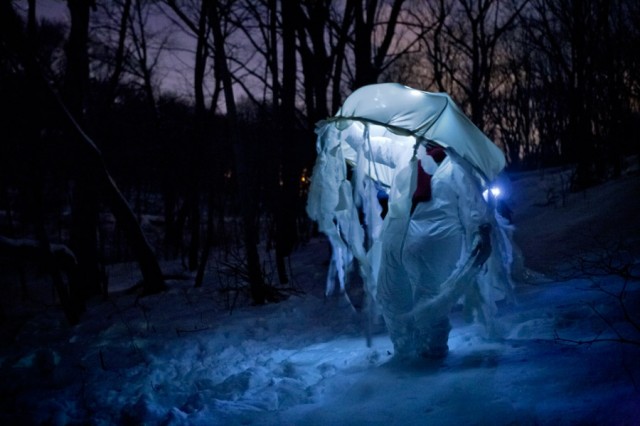