BYOBW UPDATE: Tom Price has provided an update saying that everything has been sorted out with the SFPD and that the race will proceed as scheduled. As a reminder, after the race make sure to take home everything you brought with you and help clean up the area so that the race will be able to continue in the future. 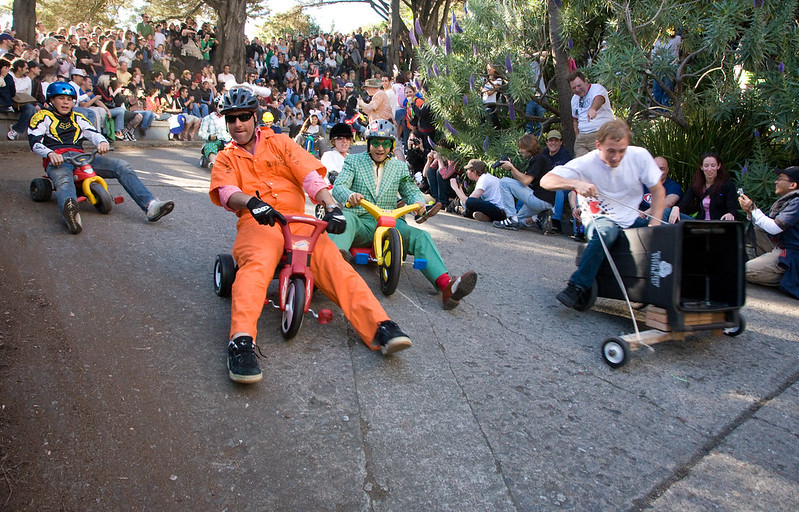 The San Francisco Police Department has contacted the organizers of the annual Bring Your Own Big Wheel event saying that they will need to get a permit for this Sunday’s event or else they will start ticketing participants. BYOBW is a big wheel race that takes place on Vermont Street, San Francisco’s most crooked street. Previously the race ran down Lombard Street, but last year moved to Vermont Street.

RIDE or PARTICIPATE AT YOUR OWN RISK!
SF POLICE HAVE PROMISED TO SHOW UP AND TICKET EVERYONE RIDING OR RACING
SFPD TACTICAL vs BYOBW? yes – this could be the case!
Tickets could be for anything like jaywalking, obstruction of traffic or other things (?!) and could be for as much as $100 or so

Here are photos and video from BYOBW 2008.

See Previously: San Francisco Might Try to Shut Down Pillow Fight & Other Events

SFPD called: Said if BYOBW applies tomorrow for NEXT years permit, then we can ride this week w/out a permit. It’s ON people.