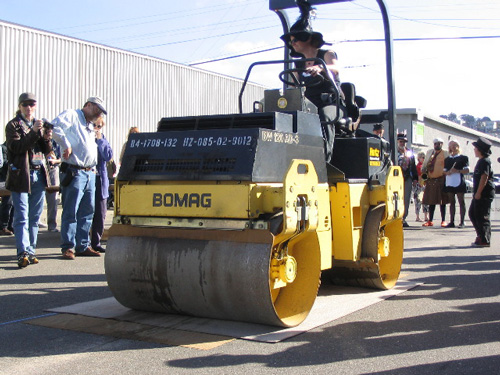 The Fourth Annual Roadworks Steamroller Prints and Street Fair takes place this Saturday, September 8th on De Haro Street (between 16th and 17th Streets) in San Francisco. The event is a fundraiser for San Francisco Center for the Book, where artists create prints in the street that are pressed by a two-ton steamroller. The prints will then be auctioned off at SFCB’s annual fundraising gala.

Roadworks: Steamroller Prints will bring together 11 local artists and arts collectives who will create original linocut prints to be pressed by the steamroller. Participating artists include Paul Madonna, whose strip All Over Coffee runs weekly in the San Francisco Chronicle and William T. Wiley, a San Francisco fixture that the New York Times has called the “dude ranch Dadaist”; and whose internationally recognized paintings and prints have been shown everywhere from the San Francisco Museum of Modern Art to Australia’s National Gallery of Victoria. Other artists participating in Roadworks include artists represented by Electric Works fine art press, nationally recognized bookmakers, woodcut experts and graphic design authorities as well as a few of the Center’s very own instructors. These gallery quality prints will be auctioned off later this fall at the SF Center for the Book’s annual fundraising gala. 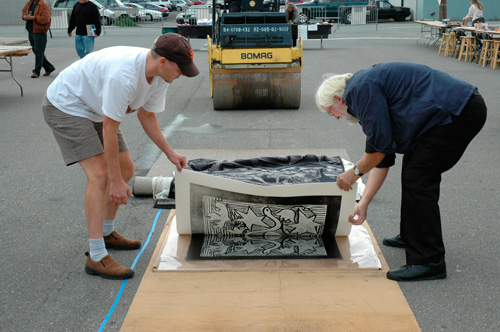