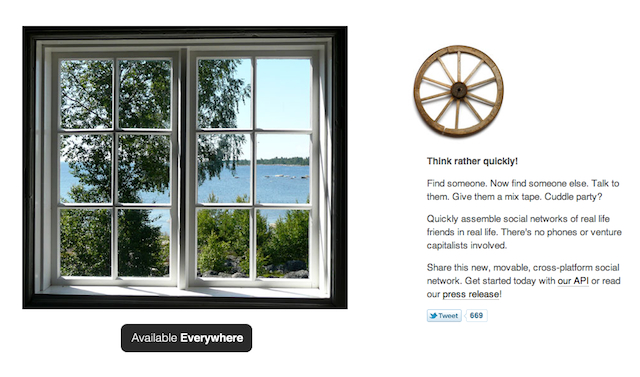 Reality, “a social network based in real life”, re-launched this week. Described as a fully portable, crossplatform social network with an endlessly flexible API, Reality is hoping it can give infamously well-funded newcomer Color a run for its money.

“When we saw a new crop of our competitors getting closer to launch, we knew we had to act now,” Donai said. “Color is especially troubling, with its push into our core market of real life social networks. Of course their software is missing the magic sauce: real life.”

And just like Color, Reality is already defending itself against charges of overspending for its re-launch.

“Once people found out how much we paid for our domain, we received a lot of ‘Why didn’t you just use GoDaddy?’ sort of feedback,” said Reality’s CFO Lore Dee. “Look, people may think our investment in reality.li was extravagant, but our $22 investment can easily be flipped to $25 by next year.”