Hank Green of Vlogbrothers shared a fascinating memory of the ill-fated fast-food chain Rax Roast Beef with his brother John Green. Rax, it seems had a bit of an identity problem. It first tried to differentiate itself in any way it could, without much success. In the early 1990s, the restaurant developed a bizarre ad campaign with a rather forthright illustrated spokesman named Mr. Delicious. Mr. D. as he was affectionately known, had no problem sharing entirely too much information about himself before getting to the food. Despite their efforts to spin Mr. D. in a positive light, the campaign failed. Shortly afterward, Rax filed for bankruptcy in 1992.

So all of this is paired with the worst or possibly best tag line in all of fast-food history. Rax. You can eat here. I think there’s an element of parody here. Like, “you can eat here” is definitely a parody of a tagline and Mr. Delicious is definitely a parody of a spokesperson– he’s not fun, he’s not happy, he’s not engaging. But they’re also trying to do a thing. They’re trying to identify with a core audience. But who is that audience? It’s fast food for grown-ups. Misogynist, unfunny, alcoholic, sad grown-ups who gamble too much and go to psychotherapy? 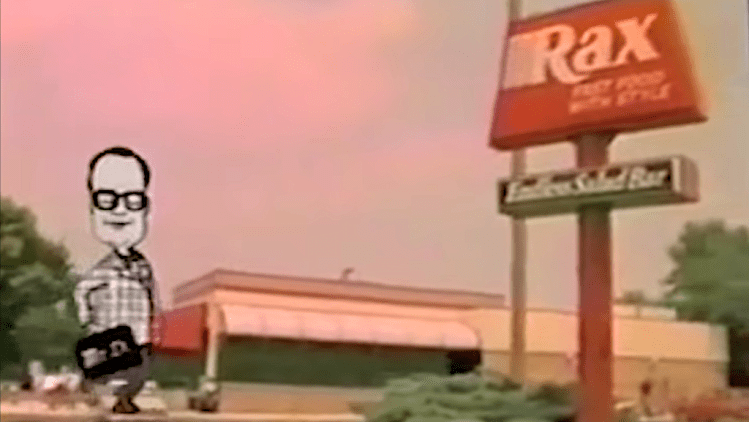 Here’s that odd promotional video that tries to spin the ad campaign in a positive light.