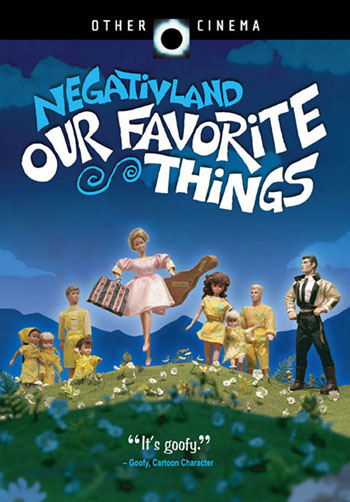 “Our Favorite Things” is a new DVD/CD by the notorious experimental music and sound group Negativland, co-released by Seeland Media and Craig Baldwin’s Other Cinema Digital. The launch event takes place at 8:30pm this Saturday, December 1st at Other Cinema in San Francisco.

Twenty-seven years of the group’s “greatest hits” have become all-new moving pictures in this amazing, years-in-the-making package. Created with 18 other filmmakers from all over the USA (and one a capella group from Detroit), OUR FAVORITE THINGS is a collaborative project that takes Negativland’s sound explorations into the world of film and video. What emerges is a darkly cracked look at 21st century America, juxtaposing paranoia, torture, control, power, weapons, fear, suicide, cola wars, mental illness, and intellectual property issues with the lighter side of dopey advertising, cartoon characters, cleaning products and Jesus.