This Tuesday, December 5th is “Ninja Day”. Ninja events are being planned around the world.

Plague your co-workers with ninja-ness and wear a ninja mask to work! Got the day off? Run wild in the streets, or dress like a ninja at the mall! Just show the world that YOU ARE NINJA!

As part of Ninja Day, the deadly hilarious video blog Ask A Ninja will be releasing their long awaited DVD, which, along with 40 “killer” episodes, is full of extra stuff, including the Geek Entertainment TV interview with Ask A Ninja creators Kent Nichols and Doug Sarine. 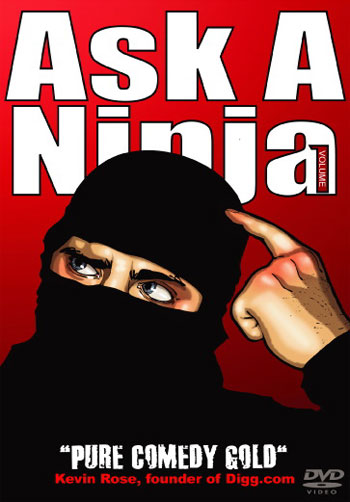 Laughing Squid is one of the honorable Nonja sponsors of the Ask A Ninja DVD release, which is now available for pre-order. To celebrate Tuesday’s momentous occasion, there will be DVD Release Party at Cinespace in Los Angeles. I’ll be there, shooting some photos, while trying to avoid being killed by the ninja.

UPDATE: Here are my photos from the DVD Release Party.