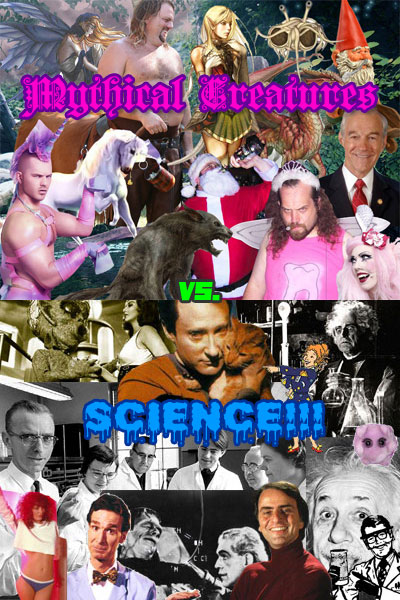 The Squirt Gun Mafia, (the folks behind the IKEA Slumber Party), is hosting Mythical Creatures Vs. SCIENCE!!! The Ultimate Squirtgun Showdown, an annual costumed event that pits mythical creatures against science in a water fight battle. The fun happens on Sunday September 30, 2012 [Update: was 9/23, now 9/30] at San Francisco’s Dolores Park from 2 PM to 3 PM (RSVP). Bring your own pre-filled squirt guns and water balloons.

Here at squirt gun mafia, we believe that the only proper and dignified way to settle disagreements is with guns, guns filled with water and perhaps followed by a batch of delicious baked goods. It’s time once more for our annual no holds bared water war, inviting the fine upstanding citizens of the Bay Area to at last vent their frustrations with one another in a mature and sophisticated manner: by dressing up silly and hurling water at each other.

Last year we saw over a hundred hippies and hipsters battle to the bitter end in Dolores Park. This year, we’re focusing on an issue more central to human nature, the ongoing battle of right brain vs. left brain, smock vs. tutu, calculator vs. crayon, test tube vs. fairy wand, a degree that might land you a job or one that will satisfy your creative yearnings, blood tests vs. crystals, astronomy vs. astrology, rapid eye movement vs. tiny invisible men tugging at your eyelids while you’re asleep.