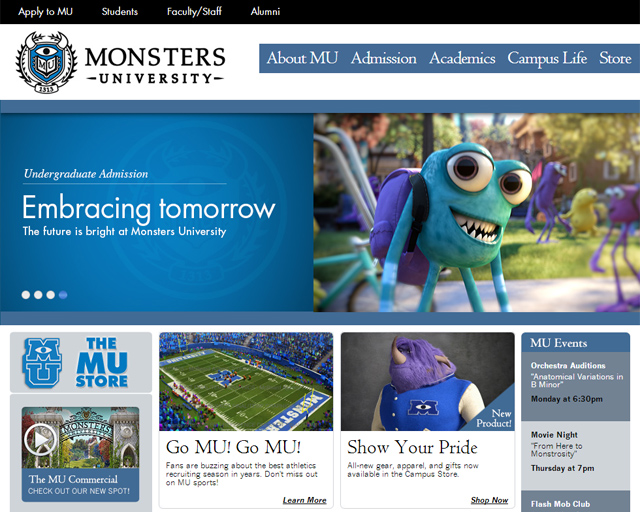 Monsters University, an upcoming animated prequel to the 2001 Pixar film Monsters, Inc., takes us back to see the period of time when characters Mike and Sulley were attending college. Disney Pixar started a great marketing campaign for Monsters University in October of 2012 by setting up the film’s website to look and function like a real college website, including an animated recruitment commercial (seen below) that gives a brief overview of the campus. They even have an online store where you can purchase university themed items and apparel. One odd/funny clothing item in the store, which seems that you can actually purchase, is a four-armed monster hoodie.

In the early years, few could have dreamed that someday the best students in the world would come to the beautiful Monsters University campus to seek their futures.

Over the centuries, generations of legends have stomped, slid, and slimed through the Quad. Today, Monsters University continues a tradition of academic excellence, ground-breaking research, development of the next generation of leadership, and the relentless pursuit of monster potential.

image and video via Monster University