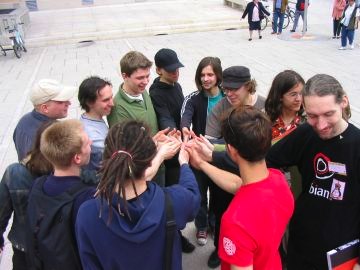 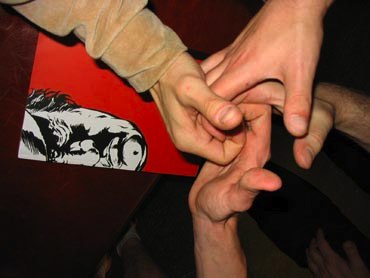 Forget about MMORPGs, our friends at monochrom have have created Massive Multiplayer Thumb-Wrestling. Here are the rules if you want to start your own game.

The principle of thumb-wrestling is simple. Two players take each others right hand and entangle their fingers – except the thumbs – forming a fist. The players then try to catch and freeze the opponent’s thumb.

By forming a star, it is also possible to play the game with three or four participants. The left hands are also free to hook up with even more players. Again a connection with up to 4 players is possible. By Massive Thumb-Wrestling according to the rules described above unlimited amounts of players can connect to join a Multiplayer Thumb-Wrestling Network. As the number of players is unlimited, global thumb-wrestling may emerge through self-sustaining peer-to-peer networks and ad-hoc socializing.