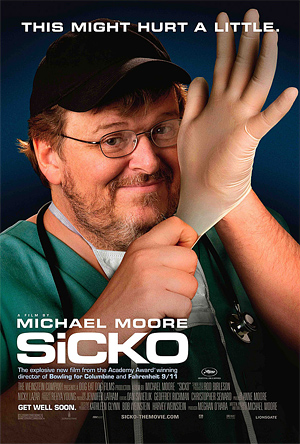 SiCKO, a new documentary by Michael Moore about the health care industry, opens nationwide next Friday, June 29th. Last weekend a copy of the film leaked out and was uploaded to Google Video, YouTube and P2P networks.

The film’s backers, The Weinstein Company, has decided to release the film a week early. Tomorrow, Friday, June 21st SiCKO will open on a single screen at the AMC Loews Lincoln Square theater in New York. There will also be “sneak previews” this Saturday, June 22nd in other cities, including San Francisco at Century 9 San Francisco Centre and AMC Bay Street 16.

According to the New York Times, the distributor Lionsgate is releasing the film earlier to “feed growing demand for the film”, not because of the it’s premature release online. Here’s more on the flim’s leak from The Hollywood Reporter and NewTeeVee argues that the film leaking out early serves to benefit Michael Moore.