To propose to his girlfriend Wendy, Jonny recruited the couple’s mutual friends in an elaborate scheme that involved a collaborative music video and a fake version of Laughing Squid. First Jonny created the music video, starring the couple’s friends and family, and set to lyrics adapted from an Adam Sandler song. The video ends with an appearance by Jonny, who asks Wendy to marry him. With the video ready, Jonny made a fake version of the Laughing Squid main page and embedded the video on a post entitled “The Most Romantic Proposal Ever!!” Then he casually invited Wendy to read Laughing Squid with him (they are both regular readers). As you can see in this video of the actual proposal, Wendy was unsuspecting until her friends began appearing in the video. Then she quickly figured out what was happening—and she said yes. From all the tentacles of Laughing Squid: congratulations Jonny and Wendy!

And you can see the fake version of Laughing Squid in this still from the reaction video (the fake post is written by fake EDW Lynch): 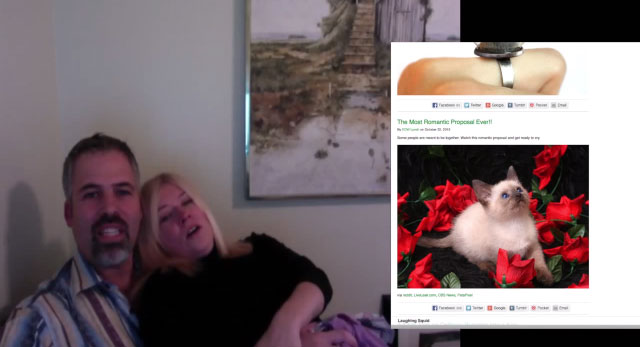