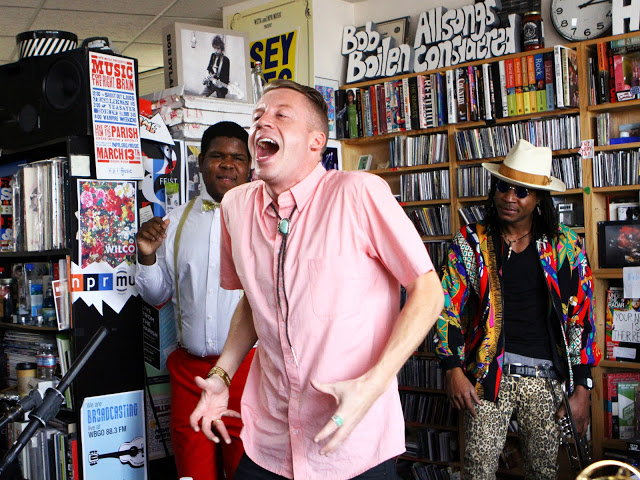 For an NPR Music Tiny Desk Concert, Seattle-based musical artists Macklemore & Ryan Lewis performed three songs live at (and at times on) the desk of All Songs Considered host Bob Boilen: “a moving message song (“Same Love”), a hilarious goof-off (“Thrift Shop”) and a rousingly inspirational closer (“Can’t Hold Us”).” Their album, The Heist, is available at their site and it’s a total winner, as is the music video for “Thrift Shop.”

Bob Boilen had this to say about Macklemore & Ryan Lewis’ Tiny Desk Concert (where ceiling tile dust fell on his desk):

The first time I heard “Same Love,” it brought tears to the eyes of a roomful of people, myself included. The song is about equality, specifically gay rights, with an unambiguous message: “It’s human rights for everybody / There is no difference.” Then, in a flip of a backing-track beat, Macklemore (a.k.a. Ben Haggerty) sings about wearing a velour jumpsuit and some house slippers, “grandpa style.”

The contrast in these songs, “Same Love” and “Thrift Shop,” makes the levity all that much memorable; as producer, Ryan Lewis is a master at the hook and clever with the melody. But this Tiny Desk Concert didn’t end there: The live, sweet, soulful sounds of singer Ray Dalton belting, “Like the ceiling can’t hold us” had Macklemore standing on my desk and shaking the dust off the ceiling tiles. Watching this video fills me with that inspirational feeling we shared watching it happen: I’m still cleaning dust around my desk, but it only makes me smile.

We have previously posted about the Tiny Desk Concerts series with the 2011 performance by Pokey LaFarge & The South City Three.

They were also recently (intimately) interviewed on Fuse:

photo by Lauren Rock for NPR