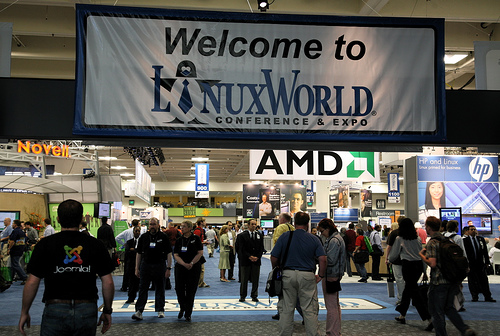 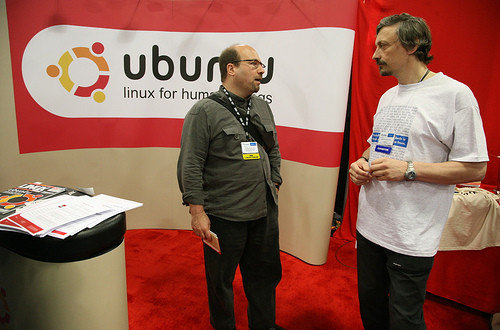 LinuxWorld 2006 is in now full swing at the Moscone Center in San Francisco (tomorrow is the last day). I stopped by for a few hours today, ran into some friends and shot a few photos.

I usually end up spending most of my time in the .org Pavilion. This year Slashdot had a big lounge there, complete with Slashdot beanbag chairs. While there I ran into Eddie and Irina from Geek Entertainment TV, with their recently acquired fancy Sony HD camera via their new gig at PodTech. They were shooting an interview with Rob Malda aka CmdrTaco, the founder of Slashdot. Look for that episode soon.

Of course this year there was quite a few people talking about Ubuntu, “linux for human beings”. Many are considering switching to it as their main OS, even leaving Mac OS X. This has been a popular topic lately. I’m going to check it out once I setup a virtual desktop using Parallels. 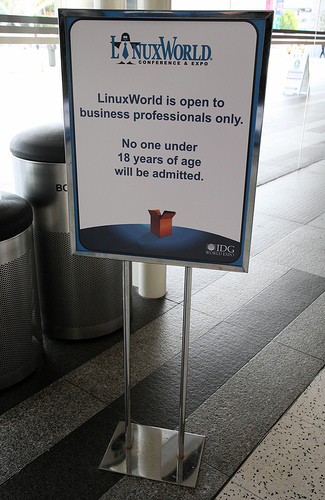 One thing that was really disappointing this year (maybe it was the case in previous years) , was the obnoxious sign that greeted you when you enter the conference. It reads:

LinuxWorld is open to business professionals only.

No one under 18 years of age will be admitted.

Jonas Luster mentioned this sign to me when I ran into him at the Socialtext booth and he made a great point about the fact that many lead linux and open source developers are under the age of 18. Also, what about Linux geeks with children? So if Linus Torvalds stopped by with his kids to show them the world that their father helped create, I guess they would be turned away. As far as I’m concerned this all goes against the nature of Linux and open source itself. As for “business professionals only”, well that’s just a load of crap. Someone needs to cut off of Tux’s tie and put him back in a t-shirt and sandals.

UPDATE 1: PT has been following-up on the LinuxWorld 2006 sign over on the Make blog. He’s been calling and emailing conference organizers. So far, nobody has come forward with an explanation.

UPDATE 2: One enterprising 17 year-old hacked LinuxWorld by wearing a suit and tie.

Dolomite has it exactly right: LinuxWorld is a free business-to-business trade show, completely subsidized by exhibitors, who invest in those booths to talk with business buyers. The new policy is a direct response to their complaints that we had too many students at the event. We were lenient on the policy in Boston, as we had not made it clear enough on marketing materials, however in San Francisco we did card most registrants. Our exhibitors tell us they have other venues to talk with and reach out to students, but that at LinuxWorld they want to focus on qualified leads. Sorry!