Grosseto, Italy-based LEGO designer Daniele Benedettelli has created a wearable telemetry exoskeleton that allows Benedettelli to move around and remotely control his humanoid robot, Cyclops MK II. In a video from this past May, Daniele demonstrated exactly how his exoskeleton and robot worked together.

Cyclops MK II is redesigned from scratch, after suggestions by my friend Benjamin Maier, who happens to be a comic designer. He came and said “It looks like a box with legs and arms! Why don’t you make it posing like a hero?” And he sketched something on paper.

The robot now looks much more humanoid, walks with 3 NXT servo motors, that are much more robust than LAs and R/C servos. It walks and turns by shifting the NXT, (moved back as a jetpack) and rotating the knees keeping the feet parallel to ground. Legs are finally straight, no more chicken-like. The arms and hands are actuated by 8 R/C servos. 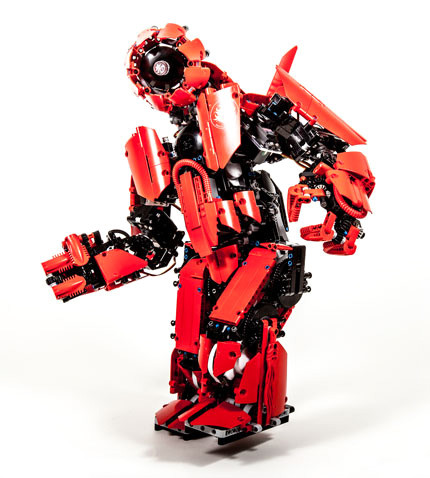