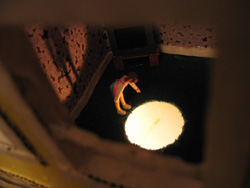 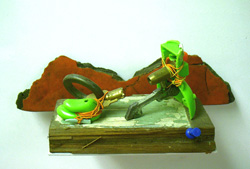 Kal Spelletich and John Colle Rogers have an art show coming up at Fringe Exhibitions in Los Angeles. Both artists will be displaying work which is influenced by their life in the Bay Area. The opening reception, which includes site-specific BBQ, is this Saturday, June 2nd and the exhibition runs through June 30th.

KAL SPELLETICH
Home Is Where The Wormhole Is: Toward A Home Of A Higher Reality, Physical Speculations On A Future State

In the Main Gallery, Kal Spelletich investigates the use of audio and light frequencies to generate altered states of consciousness. Experimenting with binaural-beat stimulation and frequency following response theories the interactive installation is a recreation of an unsolved mystery at a home in the Mission district of San Francisco. Included in the show a diorama of the actual house, video, drawings, and photographs exploring these phenomena. Special thank you to Rebecca Sanford-Smith for diorama collaboration, Rich Stone for audio, also help from Jonathan Foote and Don Gray.

The Lower Level features sculpture and video by John Colle Rogers. “Shelf Life” is an ongoing series of small vignettes made of objects found on the streets of Oakland. It is a way of reckoning with the consumption and expulsion of objects, and an attempt at making precious that, which has been forgotten. “Oakland Flow” is a video exploring different modes of transportation around the city. Focusing primarily on the freeways, the video delves into the sound and movement above and below the concrete maze. Special thank you to Aaron C. Strickler and Mary C. Wilson for video collaboration.