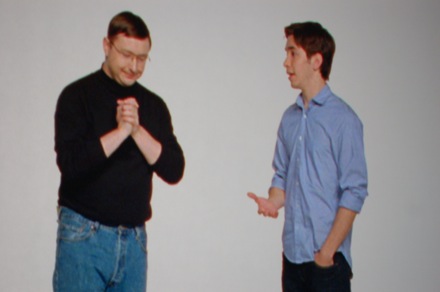 I’m following Engadget’s live coverage of the Steve Jobs keynote at WWDC 2007 and Ryan Block just reported that they started off the event with one of those “Get a Mac” ads, but this time John Hodgman appears on screen, dressed in Steve Job’s trademark black mock turtle neck and blue jeans.

10:02AM – Lights are going down. People are shouting “Steve!” It’s a Mac / PC ad… John Hodman comes out. “Hello everyone, I’m Steve Jobs.” Laughs. “I’ve got some big news this year, I want the whole world to hear it. I quit. Yes, that’s right, I’m resigning effective immediately, and shutting down all of Apple.” Huge laughs.

10:03am – “I didn’t have a choice, Vista is performing so well — it sold tens of dozens of copies. Leopard was going to get lost in all that Wow. And I’ve got my iPod killer — a brown Zune. It’s time for Apple to wave the white flag. Don’t shed tears, just take those big brains out of the Mascarpone center…”