Mac developers from all over the world are gathering in San Francisco for the 5 day long Worldwide Developers Conference 2007 (WWDC) at Moscone West which kicks off at 10am PDT tomorrow morning with a keynote by Steve Jobs. The developer beta of Leopard, the new Mac OS X operating system, will be available and there is sure to be plenty of discussion about the new iPhone, which is scheduled for release on June 29th, including rumors that Apple may release a iPhone software development kit (SDK). Of course there are also rumors of new hardware that might be announced, including a Brushed Aluminum iMac. 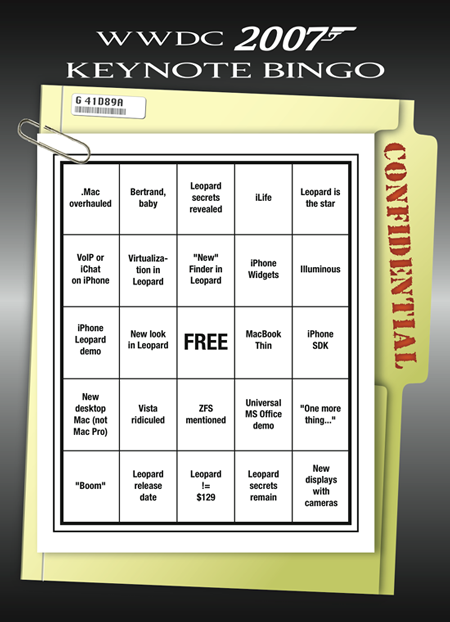 As always, Engadget’s Ryan Block and his awesome team will be there with the best live coverage of the keynote and to add to the fun, John Siracusa of Ars Technica has presented his keynote predictions in the form of WWDC 2007 keynote bingo, so you can play along when Steve fires up his Reality Distortion Field.

James Duncan Davidson who will be shooting photos of WWDC for Apple Developer Connection, has a great write-up on WWDC 2007.

For more great WWDC 2007 coverage this week, keep a close eye on great Apple blogs like John Gruber’s Daring Fireball and of course The Secret Diary of Steve Jobs (aka Fake Steve Jobs).

Oh and one more thing…parties. Yes what would a Apple conference be without a bunch of great parties, like Buzz Andersen’s 4th Annual WWDC Party and the The Delicious Generation Party.