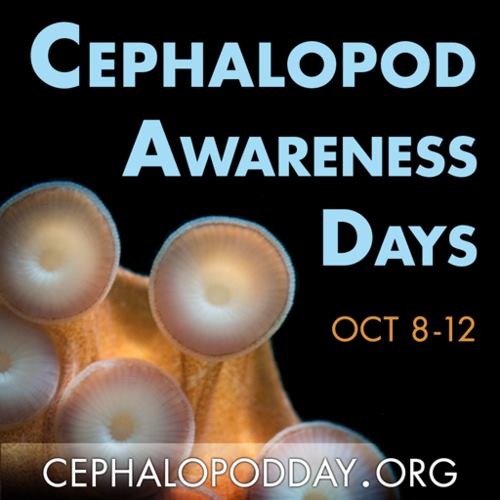 International Cephalopod Awareness Days (ICAD) are upon us. From October 8-12 (of any year), spend some time celebrating “the most intelligent invertebrates in the world”: octopus, cuttlefish, squid and more. Here’s a great place to celebrate the squid tomorrow (or really, most any day). Also, check out the official website for ICAD.

October 8 – Octopus Day, for all the eight-armed species

October 9 – Nautilus Night, a time for all the lesser-known extant cephalopods

October 11 – Myths and Legends Day, for all the fantastical cephalopods of movies, literature and legend. Release the Kraken!

October 12 – Fossil Day (to coincide with National Fossil Day), for all the incredible suckers that have gone extinct.

Cephalopod Awareness Day was established in 2007 by members of TONMO, The Octopus News Magazine Online forum. While not (yet) an event proclaimed by any official governing body, Cephalopod Awareness Day was meant to bring attention to the diversity, conservation and biology of the world’s cephalopods. The date of October 8 was chosen as an auspicious occasion for appreciating animals with a combination of 8 or 10 appendages. Octopus have eight arms while squid and cuttlefish have eight arms and two tentacles. So the eighth day of the tenth month seemed like the best choice.