The video is a view through an 8x microscope zoomed in on the dorsal side of the caudal fin of the squid.

Based on information learned from a research paper by The Royal Society, Backyard Brains performed an experiment on a Longfin Inshore Squid by hooking it up to an iPod and playing Cypress Hill through its color-changing skin. They call the experiment, Insane in the Chromatophores, and in this video, you can see the squid’s chromatophores (pigment cells) beautifully react to the music.

During experiments on the giant axons of the Longfin Inshore Squid (loligo pealei) at the Marine Biological Laboratory in Woods Hole, MA; we were fascinated by the fast color-changing nature of the squid’s skin. Squids (like many other cephalopods) can quickly control pigmented cells called chromatophores to reflect light. The Longfin Inshore has 3 different chromatophore colors: Brown, Red, and Yellow. Each chromatophore has tiny muscles along the circumference of the cell that can contract to reveal the pigment underneath. 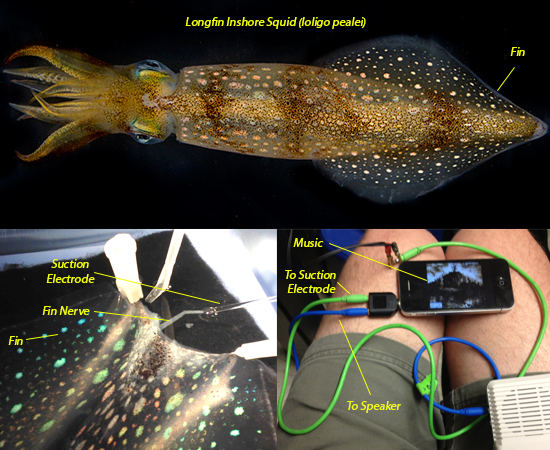 via On the Media