The Illustris project is an incredibly detailed and realistic cosmological simulation of the formation of galaxies in our Universe by a talented group of researchers and scientists. Essentially, it’s a computer model designed to build virtual universes based on what we know about such things, and the ones that the project constructed follow the rules as they are currently understood remarkably well. There are still some anomalies in the simulations, however, such as low-mass galaxies building up too soon.

According to Mark Vogelsberger, a physicist at the Massachusetts Institute of Technology (MIT) and one of the people behind the simulation, a current top-of-the-line PC would take nearly 2,000 years to process the necessary data, and the 8,000 processors that the simulation used took several months to do so.

Images and videos of the simulations are available on the Illustris website.

The calculation tracks the expansion of the universe, the gravitational pull of matter onto itself, the motion of cosmic gas, as well as the formation of stars and black holes. These physical components and processes are all modeled starting from initial conditions resembling the very young universe 300,000 years after the Big Bang and until the present day, spanning over 13.8 billion years of cosmic evolution. The simulated volume contains tens of thousands of galaxies captured in high-detail, covering a wide range of masses, rates of star formation, shapes, sizes, and with properties that agree well with the galaxy population observed in the real universe. 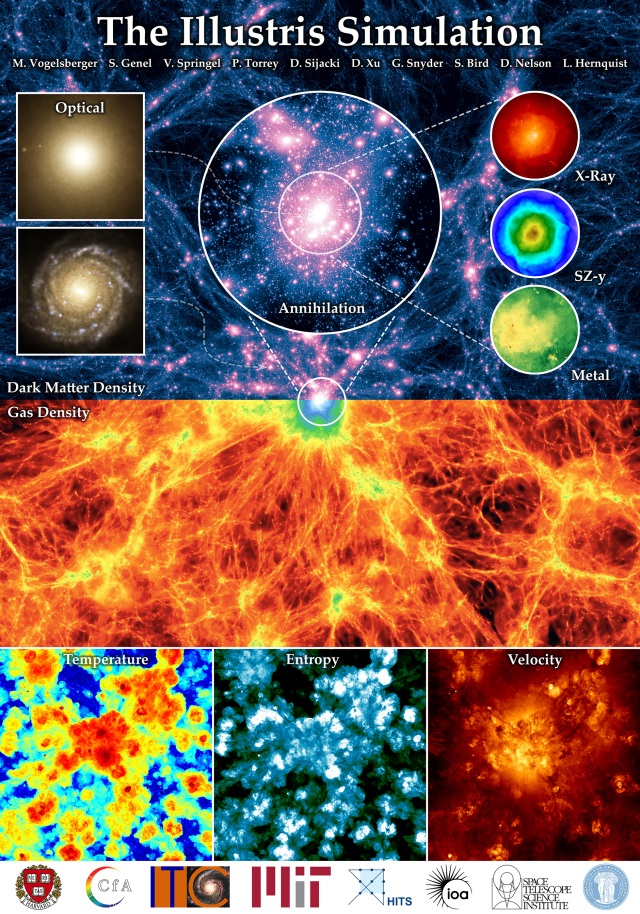