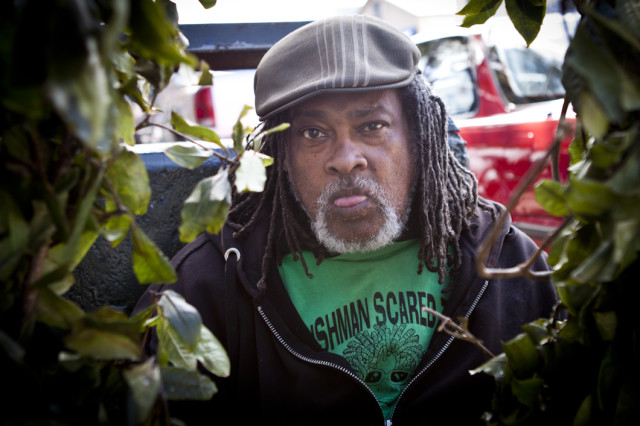 Gregory Jacobs died on February 25, 2014 from heart failure at his home in San Francisco.

Gregory, known as either the “Bushman of San Francisco” or the “Anti-Bushman of San Francisco” depending on whose truth you believe, would hide behind large leafy branches and pop out from behind them, catching unsuspecting pedestrians unaware and then asking them to pay for scare he gave them (or for photos taken). He was a fixture at the Anchor Building in the Marina in San Francisco. He had come to San Francisco by way of Arkansas in the 1980s. In 1999, Gregory partnered up with fellow busker David Johnson as a sort of bodyguard, watching out for David as he hid behind the bush. At some point, they went separate ways, some saying that they came to blows while others have Gregory asserting that he and David were good friends.

There’s no question that Gregory Jacobs was a character; polarizing, foul mouthed and assertive, but also sensitive and considerate to children and the elderly. Either way, he was someone who made himself known and in doing so, he left an indelible mark on the history of San Francisco.