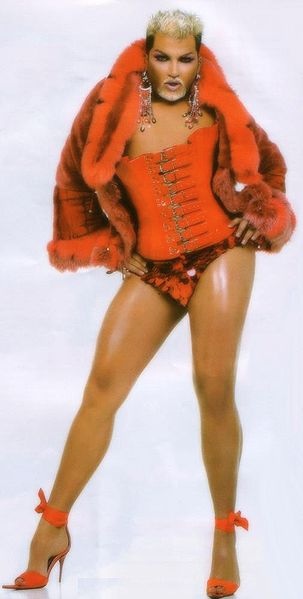 Time to rethink Bulgaria. Forget feta cheese, women’s choirs, and communist thuggery. Someone is rebooting  Bulgaria, and his name is Azis. At one level, you could simply describe him as a performer of chalga, a commercially streamlined fusion of traditional Romani (“gypsy,” ok?) folk-music and pop. But that would hardly do. In truth, Azis is Bulgaria’s answer to Madonna, Michael Jackson, Boy George, Liberace, and Marilyn Manson all rolled into one colossal glitter-dusted, KY-oozing jelly roll.

A Romani outsider by birth, this Balkan Bear’s star rose quickly with his first release in 2003, an unsuccessful bid for Parliament in 2005, an unofficial but highly publicized gay marriage in 2006, and the birth, in 2007, of a daughter via artificial insemination. But all this is nothing compared to the visual spectacle of his music videos. Whether playing Bollywood in an Erte-inspired Ice Queen get-up or playing nasty with Tom-of-Finland-inspired gangsters, the stylistic audacity of this hefty and uncompromising man-diva clearly demonstrates: it’s not your father’s Bulgaria anymore.