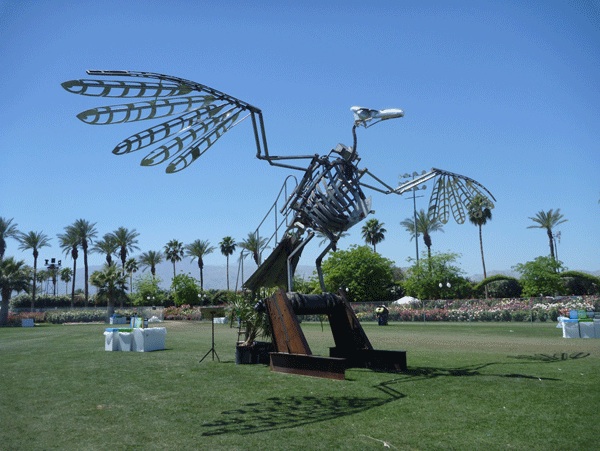 Make recently did an interview with Christian Ristow, who’s new interactive mechanical bird installation “Fledgling” will be at Maker Faire Bay Area which takes place May 21-22.

Tell us about the project you’re bringing to Maker Faire. What inspired you to make it and how long did it take?

Fledgling is a large mechanical bird, made almost entirely of stainless steel. One person at a time, from the general public, is able to ascend a staircase on the tail feathers, and then lower themselves into a seat, which is in the ribcage. From there, they can pedal a set of bicycle pedals, which set in motion an intricate arrangement of cranks and gears and chains and sprockets that cause the wings to open and close in much the same way that a real bird’s wings do.

I was inspired, rather directly, by birds. I find them beautiful and totally amazing in the way they work, from a biomechanical point of view. Fledgling was built under a very tight deadline, and was completed in eight weeks. I’ve never built such a complicated and ambitious piece in such a short timeframe, and hope that I never have to again!