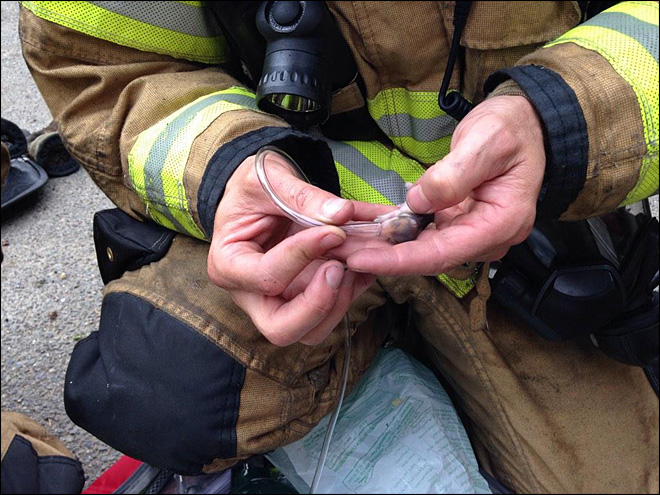 Firefighters revive a family of hamsters with an oxygen tank adapted for tiny animals after they were rescued from a fire that had burned through a mobile home in Lacey, Washington. The Lacey Fire Department has determined that the fire was caused by an unattended clothes dryer.

They grabbed the five rodents — later identified as Oreo, Madonna and three unnamed babies — and brought them outside to safety.Using the knowledge gleaned from their “pet emergency pocket guides,” firefighters treated the injured hamsters with oxygen and other first aid equipment. Tim Hulse with the Lacey Fire Department said the team was able to save all but one of the hamsters. – KOMONews

Fire now out. Family of hamsters rescued and receiving care from our fire fighters. pic.twitter.com/kW0UFyBs8p

"Oreo", "Madonna" and the baby hamsters being treated with oxygen. LFD3 crews have animal rescue and aid equipment. pic.twitter.com/CFruyYH5PS

Yes. Our crews are trained and specially equipped to care for animals that have been rescued from a house fire. pic.twitter.com/Vj2lxP2Ybt

via KOMONews, Nothing To Do With Arbroath