‘Tis the season…for stealing packages from neighborhood porches. Just like the guy who filled a box with cat poop to deter future thieves, former NASA engineer Mark Rober came up with a brilliant plan that would not only deter package stealers, but also document the hilarious consequences for stealing the box in the first place.

Someone stole a package from me. Police wouldn’t do anything about it so I spent the last 6 months engineering up some vigilante justice. Revenge is a dish best served fabulously. Vid link- https://t.co/9OjD6ETdbZ pic.twitter.com/u4o0doWglr

Rober, who has previously created a number of very clever robots, put his big brain to use and rigged a fake package to release copious amounts of glitter through centrifugal force when opened. The next stage came in the form of five automated squirts of fart spray. If that weren’t enough, Rober set up four LTE smartphones to document every angle of this hilariously coordinated catastrophe.

Rober correctly predicted that the thieves would want to get rid of the package as soon as possible without finding the phones inside and GPS would lead Rober right to the discarded box.

Another hilarious piece to this elaborate deterrent was from where this fake package was sent and to whom it was going. Citing the booby trap laden film Home Alone, Rober put Kevin McCallister as the package sender (with the actual address from the film) and pals Marv and Harry as the package recipients.

…to make it look like an actual delivered package we added some shrink wrap and a delivery, label which is perhaps my favorite part of the whole thing because if the thief wasn’t in such a hurry they’d see that the package is actually coming from my childhood hero and inspiration for this project Kevin McCallister. I even looked up and am using the address of the actual house they filmed the movie in. And of course it’s being shipped to his boys Harry and Marv. 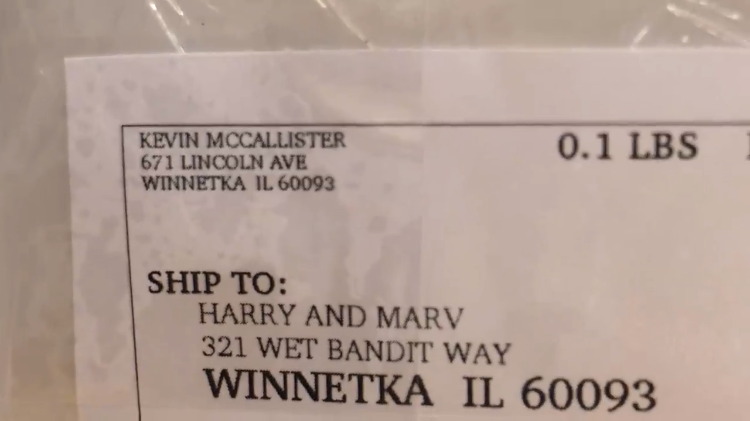