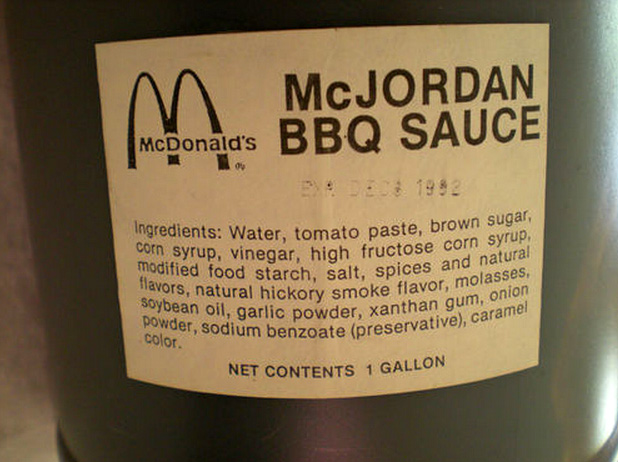 On eBay, there was an unopened, expired jug of McDonald’s McJordan BBQ Sauce from 1992 up for auction. It was the sauce used on the McJordan Burger, a promotional burger named after pro basketball player Michael Jordan (in some markets, it was called the “Big 33” after Larry Bird). If you were hoping to bid on this gallon of nostalgic goodness, sorry, it sold on Monday October 15 to an anonymous Chicago buyer. The asking price: $9,995.00 (though, shipping was free). Here’s a 1992 McDonald’s commercial, called “The Showdown,” that stars both Jordan and Bird.

A once in a lifetime chance to own the rarest of rare Michael Jordan and McDonald’s collectible! The only one left on Earth?? This gallon of McJordan BBQ sauce is from 1992 when McDonald’s sold McJordan Burgers as a promotional menu item.

The McJordan is a quarter-pound hamburger with smoked bacon, cheese, McJordan barbeque sauce, onions, mustard and pickles. All of Michael Jordan’s “favorite ingredients”. The burger was sold only in limited markets in the United States.

Michael Jordan was the first person to have a McDonald’s sandwich as a namesake. Jordan appeared in television spots to promote the burger.

It is in new condition and has never been opened.

Don’t miss this opportunity to own this incredibly rare piece of memorabilia! 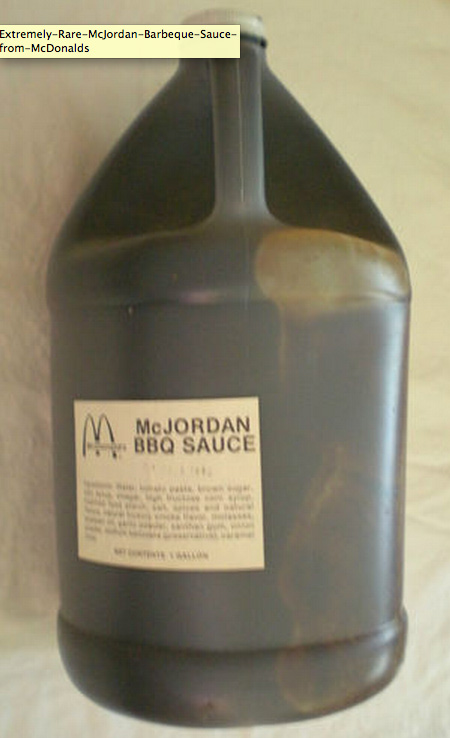 via CSNChicago and Eater