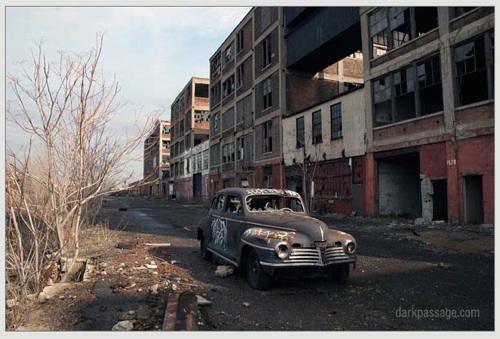 My friend Julia & I just bought a vacation home in Detroit. It’s a small but comfortable three-bedroom house in good condition that sits on a shorefront plot of land along the banks of an actual river. The location is serene, and the price was right — the whole thing cost less than a new Cadillac Escalade. A lot less, actually. But that was only part of the appeal. Just as important to us was the idea that Detroit is poised to become a laboratory for the latest social trend: The Greening of America.

Sure, Detroit may be the scariest place you can think of to live or even visit. Or is it? With the decline of the American auto industry, over seventy percent of the city’s populace fled to the burbs between 1966 and 1990. For those who remained, heroin and crack cocaine savaged the city’s neighborhoods. Yet when everyone else moved away, most of the thugs did too, leaving huge swaths of once-dense urban blocks very nearly depopulated — and quite a bit greener.

The nightmarish view of downtown Detroit and its suburbs is ancient history. The city is currently home to a strong (though small by coast-city standards) art scene. Wayne State University is becoming known for it’s cutting-edge gallery shows, while older artists have contributed much to Detroit’s exceptional public art installations. Detroit is also the epicenter of the Urban Adventure movement, with intrepid explorers coming from as far away as Europe and Australia to clandestinely explore the city’s beautifully decaying factories, mansions, hotels, mental hospitals, and skyscrapers. 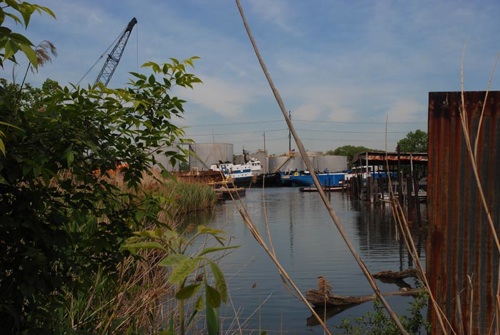 Most of all, though, Detroit is already one of the greenest cities in America. I mean green as in green grass! Visit any typical residential block in the heart of Detroit, and what do you see? A handful of occupied houses and a few piles of rubble that once were homes, while the rest of the block has completely reverted back to nature. Rabbits, possum, raccoons, and the occasional deer ramble through this urban landscape as though they own it. We’ve gone canoeing along Detroit’s storied River Rouge canal, and we’ve climbed the abandoned, 37-story {REDACTED}* Building to get an up-close view of a peregrine falcon nest. Detroit’s public transportation system is no worse than that of most other American cities, and it’ll only improve as the renaissance continues. Also – oddly enough, the city has one of the newest and best freeway networks in the country – great biking and roller-skating lanes for when we run out of oil. Homeowners can plant gardens on their spacious lots or those next door as they like.

The price of owning anything in San Francisco, Brooklyn, L.A., or any other “prime” location became prohibitive, even surreal long ago. Even with the recent downturn in the housing market, it is still impossible for most artists, writers or craftsmen to buy in these places. Meanwhile, the industrial engine of the “Rust Belt” continues to freeze up, providing green spaces in cities like Detroit. At the same time, more people are able to work from literally anywhere in various Internet and computer related jobs. Being able to break away from the overcrowding and frenetic pace of life on the coast(s) for long periods and kick back in a relaxed tree shaded waterfront home that we actually own outright is a luxury that, I for one, after thirty years in Frisco never thought I would know. Detroit has plenty of water, green trees, wide-open land, and no crucial military targets. Everyone world round thinks it’s a dump. There’s no place to go but up for this town. The icing on the cake is the simple fact that no one will ever waste a Nuke on Detroit.

A similar article was published in Everywhere Magazine Issue 04.