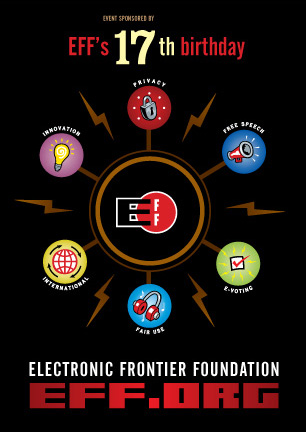 Our friends at EFF are celebrating their 17th Birthday Party next Tuesday, January 15th at 111 Minna Gallery in San Francisco. Happy birthday!

After a day at Macworld, join EFF in celebrating our 17th year of defending digital rights! Since 1990, EFF has been there fighting for freedom and civil liberties.

The birthday bash will be on January 15, 7-11 PM, at 111 Minna Gallery in San Francisco. Headliners Adrian & the Mysterious D (A+D), the DJ duo that founded the seminal mashup party “Bootie,” will be dropping a shameless, genre-smashing blend of tracks, backed up by DJ sets from Bay Area copyfighters Ripley, Kid Kameleon and EFF’s own J Tones and Qubitsu.

The EFF party will also feature an exclusive chocolate sampling with TCHO, “a new chocolate company for a new generation of chocolate enthusiasts.” Founded by Wired co-founder Louis Rossetto and legendary chocolatier Timothy Childs, himself a former technologist, TCHO will be bringing a “beta release” of its best dark chocolate to the party table. Attendees are invited to vote for their favorite TCHO beta chocolate flavors at the party — feedback that will help define TCHO’s next steps as they gear up for a national release.

We’ll be asking for a $20 donation at the door. No one will be turned away for lack of funds, but all proceeds will go toward our work defending your digital freedom.