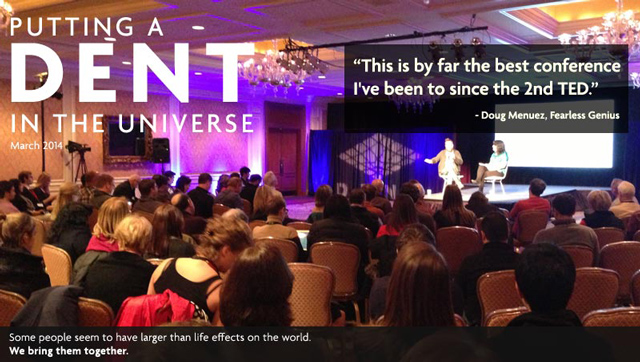 Now in its second year, Dent the Future is a four-day long conference that “explores the magic and science of visionary leadership and groundbreaking success” with an “aim to translate the success of great leaders in business, politics, or charity into a set of lessons for those who would ‘put a dent’ in the future.” This year’s event will feature Randi Zuckerberg, founder of the online community Dot Complicated, as its keynote speaker. The conference and the optional ski and activity event days happen March 23-26th, 2014 at the Sun Valley Resort in Sun Valley, Idaho. Request an invitation to attend at the Dent the Future site.

Where other events bring people to the stage to describe their work, we work tirelessly to understand why these people were the ones to succeed. What decisions did they make? Are there lessons from their paths that can teach you how to succeed in your vision?