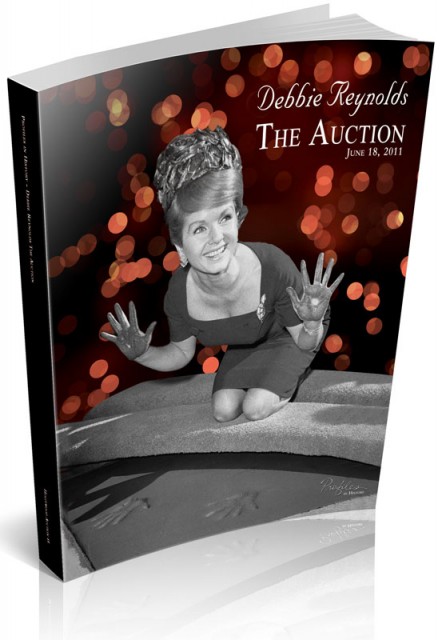 Actress Debbie Reynolds is auctioning off what is undoubtedly the most iconic collection of movie-related garments, props and memorabilia that has ever existed. It covers films ranging in time from Blood and Sand (1922) to The Spy Who Shagged Me (1999). In Between are such classic films as Casablanca, Wizard of Oz, Doctor Doolittle, Singing in the Rain, The Seven Year Itch (yes, they have that dress), Cleopatra, The Sound of Music, and so much more.

The auction takes place on Saturday, June 18th in Los Angeles. Here are a couple great articles on the collection and the back-story behind the auction from Wall Street Journal & The L.A. Times (and BBC has a brief interview with Reynolds)

I had a chance to see the collection in person, when I was down in L.A. last week, and it was incredible. I’ve posted a bunch of photos on Flickr, and included several below. If you can’t see it in person, they’ve made a PDF version of the auction catalog downloadable for free which is 90MB of amazing full-color images of everything available in the auction. The auction includes costumes worn by such Hollywood icons as Rudolph Valentino, Marilyn Monroe, Gary Cooper, Elizabeth Taylor, Charlton Heston, Barbra Streisand, Robert Redford, Cary Grant and Grace Kelly amongst many others. There are also posters, furniture, props and personal items of film stars. The auction preview featured images and video of the items in the films where they appeared–like the image below of Elizabeth Taylor wearing this headdress in Cleopatra: Here’s the original concept art for Rex Harrison’s Doctor Dolittle costume in the 1967 film; it was displayed with the finished costume, props, and even the stuffed parrot: This coronation robe was worn by Marlon Brando in Desirée (1954). It’s worth reading the catalog description: Debbie Reynolds’ most famous film role was as Gene Kelly’s dance partner in Singin’ in the Rain. She was nominated for an Oscar for The Unsinkable Molly Brown, and also starred as The Singing Nun. She later had a diverse television career including recurring roles on Will & Grace and Kim Possible, and she’s the mother of Star Wars actresses Carrie Fisher. Here’s a dress Debbie Reynolds wore in Singin’ in the Rain: From Romeo and Juliet (1936), this colorful tunic: My partner Danielle with the Judy Garland Wizard of Oz test dress & alternate Arabian-design for the Ruby Slippers: All those images and more are on Flickr at higher-res if you want to see details.

Joseph Maddalena, owner of the auction company and star of the Syfy series Hollywood Treasure, believes the initial sale could raise between $4 million and $6 million. There are two more planned for the remainder of the collection.

Here’s Debbie Reynolds own video invitation to the auction:

A feature by Antiques Roadshow on the collection (seems to be from a few years back):