After a much-publicized departure from hosting NBC’s Tonight Show – and the severing of a 22-year relationship with the network – O’Brien hit the road with a 32-city music-and-comedy show to exercise his performing chops and exorcise a few demons. The “Legally Prohibited From Being Funny on Television Tour” was O’Brien’s answer to a contractual stipulation that banned his appearance on television, radio and the Internet for six months following his last show. Filmmaker Rodman Flender’s resulting documentary, Conan O’Brien Can’t Stop, is an intimate portrait of an artist trained in improvisation, captured at the most improvisational time of his career. It offers a window into the private writers room and rehearsal halls as O’Brien’s “half-assed show” (his words) is almost instantly assembled and mounted to an adoring fan base. At times angry, mostly hilarious, O’Brien works out his feelings about the very-public separation with comedy and rockabilly music, engaging in bits with on-stage guests such as Stephen Colbert, Jon Stewart and Jim Carrey, duetting with Jack White and sweating out manic Elvis Presley covers with his band and back-up singers. We see a comic who does not stop — performing, singing, pushing his staff and himself. Did Conan O’Brien hit the road to give something back to his loyal fans, or did he travel across the continent, stopping at cities large (New York, Las Vegas) and remote (Enoch, Alberta) to fill a void within himself? 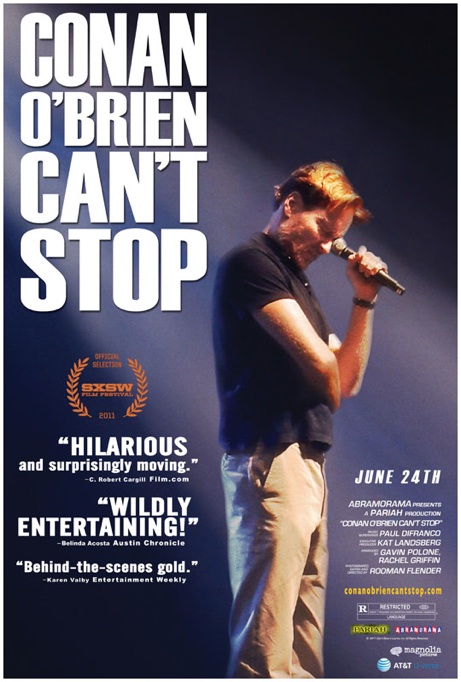