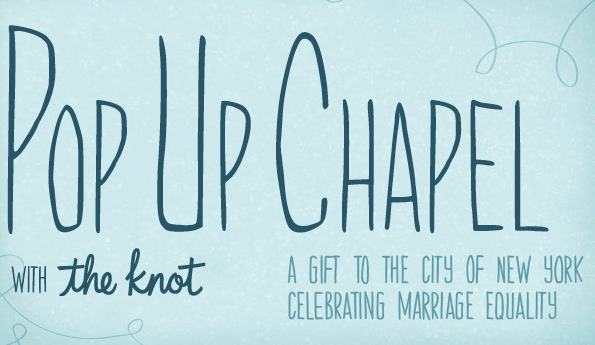 Pop Up Chapel is a temporary wedding chapel that will be set up in New York City’s Central Park as a venue for 24 same-sex weddings on one day, July 30th. The chapel is a celebration of the legalization of same-sex marriage in the state of New York.

The Pop Up Chapel is a gift to the city of New York. Inspired by the excitement surging though the city in the wake of the Marriage Equality Act passing, we wanted to do something to celebrate the fact that all New Yorkers are finally considered equal in the eyes of the law. We will provide free, beautiful, and customized weddings to 24 New York couples who want to get married in front of the city. The Pop Up Chapel is a gift to the couples who can finally get married, on behalf of the community who wants to share in the solidarity of this momentous and historical bill becoming a law.