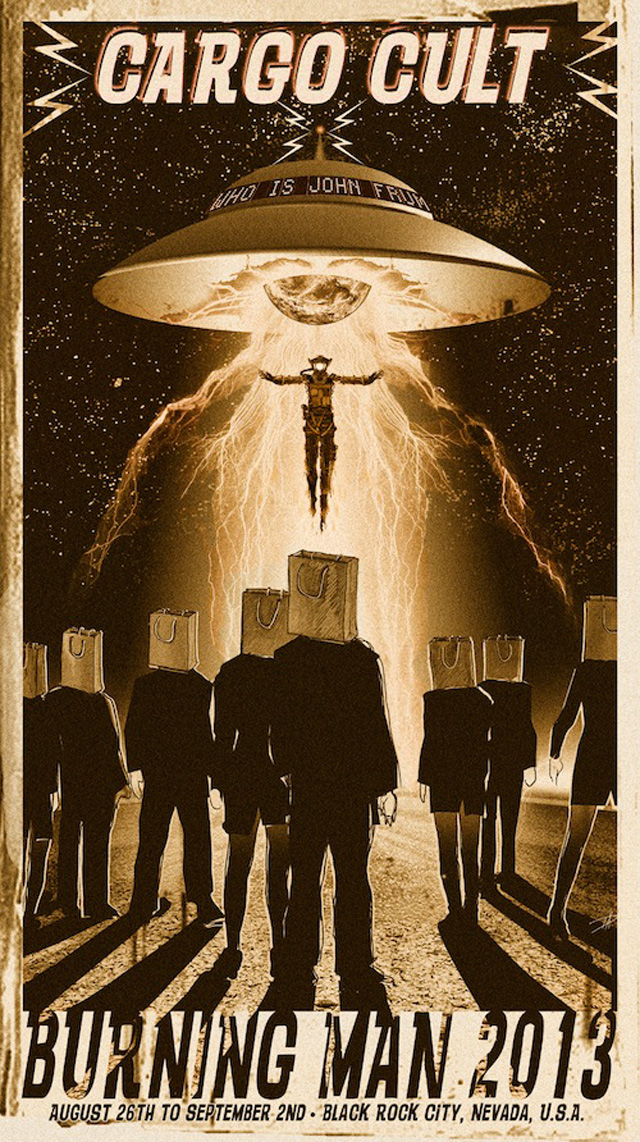 “…who is John Frum, where is he really from, and where, on spaceship Earth, are we all going?” / art by “DA” Dominic Tinio

The art theme for the 2013 Burning Man festival has been revealed: Cargo Cult. The theme is based on the still-active Melanesian alt-religion whose followers (“messengers”) worship a mysterious deity figure named John Frum. Frum embodies the spirit of American serviceman who dropped cargo from the sky (in the form of “unimaginable riches,” “magical foodstuffs that never spoiled” and “inconceivable power sources”) to the South Sea island chain during World War II. After these troops left, the primitive islanders constructed a “sky-craft” to woo back “Frum” and hasten the return of his magic life-altering cargo.

This Myth of Return is no less relevant today. To put this in a modern context, what if your electricity went dead and stayed that way — would you know how to make the current flow again? Can you fix your car if it breaks down, or build yourself a new one? Like the islanders, most of us are many steps removed from the Cargo that entirely shapes our lives. We don’t know how it’s made, where it’s made, or how it works; all we can do is look beyond the sky and pray for magic that will keep consumption flowing.

To honor the theme, the Burning Man figure will be constructed on top of a spaceship-like “sky-craft” pavilion. Burning Man happens at Nevada’s Black Rock Desert from August 26 to September 2, 2013. 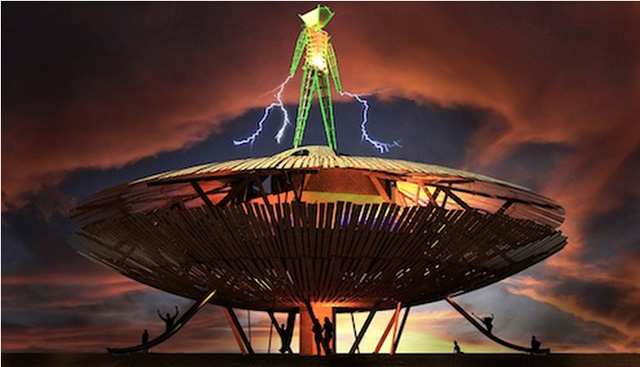 Burning Man 2013 will court the return of our benevolent Visitors from Elsewhere by constructing an enormous replica of their sky-craft, hewn from the primitive materials of our backwater planet. Burning Man will stand atop this streamlined structure, majestically revolving like an interstellar beacon. Within this three-decked vessel participants will encounter the Temple of the Navigator, a shrine that features six hand-operated zoetropes that will function as prayer wheels. These will rehearse what little we know, or believe we know, of John Frum’s story. A sweeping observation ring surrounding this central chamber will afford panoramic views of both the playa and our city.