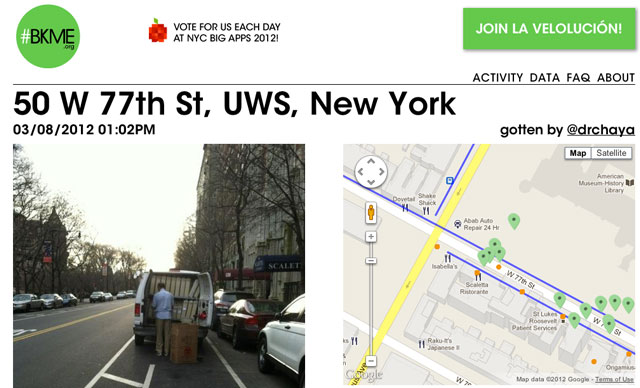 BKME is an online platform that lets New York City bicyclists record bike lane parking violations. Bicyclists photograph violations as they happen, tweet the photos with the #BKME hashtag, and the platform adds the violation and photo to an online map. The BKME map also shows where bike lane citations are being issued by NYPD. BKME was created by New York University students Martín Bravo, Alex Kozovski and Fred Truman.

BKME.ORG is a platform that channels the power of cyclists to reclaim bike lanes from vehicles.
We provide a way for cyclists to record bike lane violations collectively and in realtime.
We collect and place this data on a map in order to bring out problematic violation hotspots.
We intend this initially for cyclist awareness and ultimately to be acted upon and resolved by the local government.