Sakura Gakuin is a Japanese pop (J-pop) idol group made up of 12 young girls in their early teens. Several subgroups of the “band” contribute songs to their album “Sakura Gakuin 2010 Nendo ~message~“. One of these is BABYMETAL.

In the video, the crazy-cute girl-trio materialize in via a vaguely satanic circle–sans pentagram, it must be noted. They are backed by a crunching skele-costumed metal trio, and you have to say the chocolate-in-peanut-butter mix of J-pop cute with dark metal stylings works pretty well. Maybe less on the cutesy chorus than the skitter-rap-rhythmed verses. Yes, I am taking the musical aspect of this seriously, just for a second. And… done. 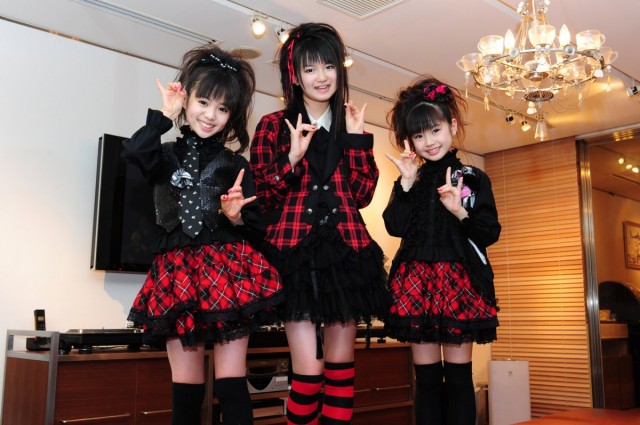 I’m sure that Sakura Gakuin as a whole have a great thing going. But, c’mon. These kids should quit the day job and get us a whole album / string of videos for BABYMETAL, ASAP. But don’t take it from me, here’s a Japanese Pop enthusiast perspective: 19-year old Danish blogger Nino-baby reviewed the whole album and here’s her take:

Heavy Music Club BABYMETAL – Doki Doki?Morning
No doubt the best song on the entire album xD I’ve never heard an idol song like this ever. Amazing Suzuka singing to Moa’s and Yui’s young childish voices with metal-like rock music in the background just sounds freaking awesome! And I must not forget to mention I love the song’s intro going from cute idol-like innocence to hardcore rock style in less than 10 seconds xD Just too epic for words *o* I can’t wait to hear more BABYMETAL songs – this sub unit is just the best thing ever created! (lol)

An intro video Sakura Gakuin, where they introduce themselves and say impossibly cute things (for a bit too long):