Art of Bleeding presents a remix of one of those classic Halloween Safety films.

At of the height of the razors-in-apples hysteria, films like these ruined Halloween in classrooms everywhere. (Or did the fear make the holiday more exciting?) Now it’s Art of Bleeding’s turn to slash and adulterate these questionable cinematic treats. 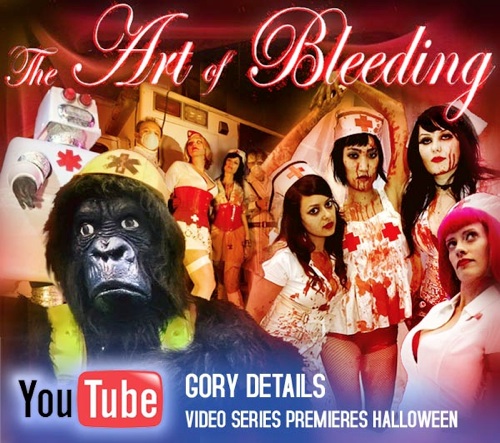 Art of Bleeding will be premiering their special Halloween show “The Spirits of Safety” on October 25th at the California Institute of Abnormal Arts (CIA) in Los Angeles.

The Art of Bleeding presents the LA PREMIERE of special Halloween show, “The Spirits of Safety,” the latest installment of Magic Ambulance Theater, in which Abram the Safety Ape and RT the Robot Teacher discover Halloween’s connection to True Safety Consciousness through the unnatural use of a CPR mannequin, ectoplasmic mishaps, and the siren charms of the Art of Bleeding nurses. The evening also features a squirmy Breast Cancer Awareness Tutorial and the burn ward comedy of Art of Bleeding’s resident “funmaker” Dr. Sunshine. Guest internCreekbird contributes his unique brand of musical quackery, and Polly Peabody stops in with a burlesque tribute to the good old days of mail-order morphine. The evening will begin with a sneak peek at “GORY DETAILS” our YouTube video series based upon first-person medical emergency stories recorded in the AoB ambulance. Each episode recreates a different true-life story with the help of costumed characters, puppets, and animation. (Doors 7pm, Videos 8pm, Live show 9pm).

At the show they will be giving a preview of the new Art of Bleeding YouTube series “Gory Details”, based on true medical emergency stories.

The “Gory Details” videos are based on true medical emergency stories solicited on public streets from random passersby and recorded in the group’s “magic ambulance” or via the Gory Details hotline. Each episode recreates a different account with the dysfunctional kid’s show characters and a cast of inappropriately clad cast of nurses. Art of Bleeding also performs lives shows featuring these same and similar characters.

Here’s the Art of Bleeding performance “Crawl Away Kids” from How to Destroy the Universe Festival 6 which took place in Oakland back in April.