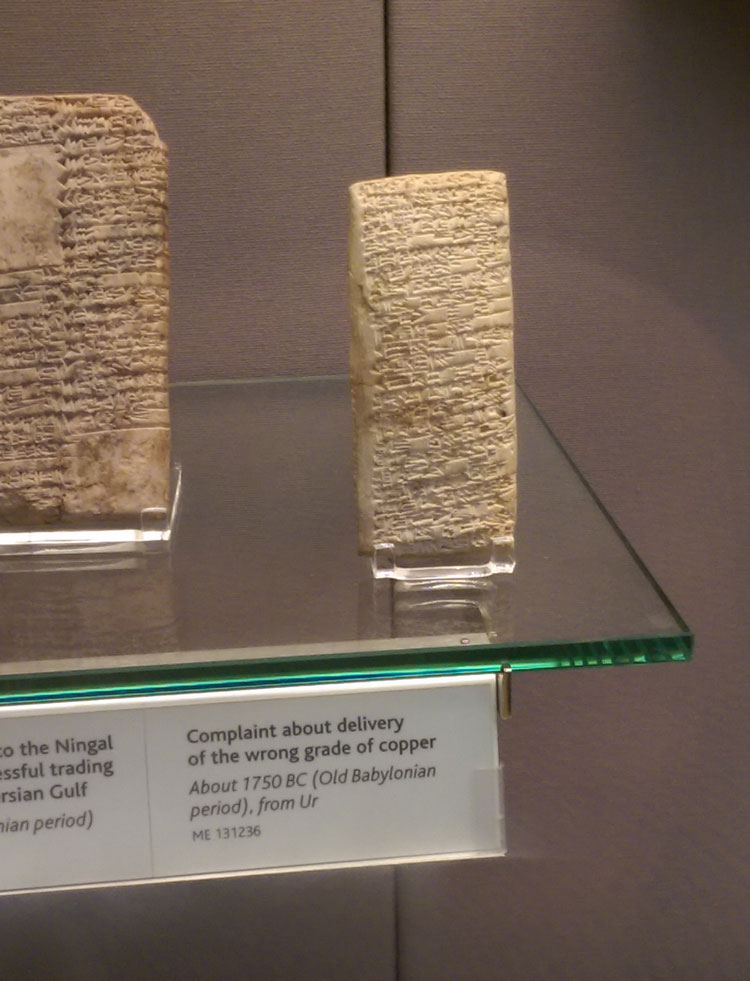 Among the artifacts at the British Museum in London is an ancient Babylonian customer service complaint that was inscribed on a clay tablet sometime around 1750 B.C. The complaint is regarding problems with two shipments of copper ore, as the museum notes in their description:

Clay tablet; letter from Nanni to Ea-nasir complaining that the wrong grade of copper ore has been delivered after a gulf voyage and about misdirection and delay of a further delivery; slightly damaged.

Reddit commenter labarna has helpfully provided a full translation reportedly from the book Letters from Mesopotamia by Assyriologist A. Leo Oppenheim. Turns out Nanni was pretty angry:

When you came, you said to me as follows: “I will give Gimil-Sin (when he comes) fine quality copper ingots.” You left then but you did not do what you promised me. You put ingots which were not good before my messenger (Sit-Sin) and said: “If you want to take them, take them; if you do not want to take them, go away!”

What do you take me for, that you treat somebody like me with such contempt? I have sent as messengers gentlemen like ourselves to collect the bag with my money (deposited with you) but you have treated me with contempt by sending them back to me empty-handed several times, and that through enemy territory. Is there anyone among the merchants who trade with Telmun who has treated me in this way? You alone treat my messenger with contempt! On account of that one (trifling) mina of silver which I owe(?) you, you feel free to speak in such a way, while I have given to the palace on your behalf 1,080 pounds of copper, and umi-abum has likewise given 1,080 pounds of copper, apart from what we both have had written on a sealed tablet to be kept in the temple of Samas.

How have you treated me for that copper? You have withheld my money bag from me in enemy territory; it is now up to you to restore (my money) to me in full.

Take cognizance that (from now on) I will not accept here any copper from you that is not of fine quality. I shall (from now on) select and take the ingots individually in my own yard, and I shall exercise against you my right of rejection because you have treated me with contempt.

photo via the British Museum