Last night I had the honor of meeting legendary comic artist Al Jaffee, who is best know for his work with Mad Magazine, at the opening of his new art exhibit “Is This the Al Jaffee Art Exhibit?” at the Museum of Comic and Cartoon Art (MoCCA) in New York City. It’s an amazing retrospective of Al’s work, including illustrations from his new book Al Jaffee’s Mad Life. The show is up through January, 30th, 2011 and I highly recommend checking it out if you are in NYC.

Is This The Al Jaffee Art Exhibit? is an exhibition that spans the many decades of the career of the inimitable AL JAFFEE, famous for his long creative association with MAD magazine.

The exhibition will showcase a selection of Al’s amazing, all-new illustrations from the just-released biography, Al Jaffee’s Mad Life. The drawings chronicle his childhood in a Lithuanian shtetl and his traumatic loss of his mother in the Holocaust. The exhibition will also feature original art from his Mad Fold-Ins, and other classic work from his career at Mad magazine and elsewhere. The exhibition is curated by Danny Fingeroth and Arie Kaplan.

Born in 1921, AL JAFFEE was a member of the first graduating class of New York’s High School of Music and Art (where his classmates included future Mad colleagues HARVEY KURTZMAN, AL FELDSTEIN, and JOHN SEVERIN). Jaffee worked as an editor, writer and artist for STAN LEE at Timely (later Marvel) Comics during the 1940s. Then, in 1955, Jaffee joined “the Usual Gang of Idiots” at Mad where he’s been a mainstay ever since, entertaining generations with his Snappy Answers to Stupid Questions and Mad Fold-Ins. Despite repeated requests, Jaffee refuses to retire, and is frighteningly active, including still doing the Fold-Ins for Mad. 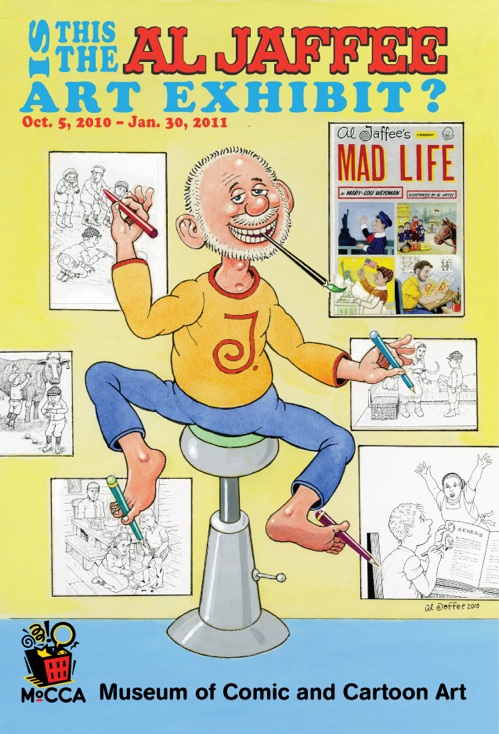