Ron Fugelseth, who is a loving father and creative director at Oxygen Productions, created a wonderful video on Friday, August 24th, 2012 that documents both him and his son sending a toy train “Stanley”, which is the boy’s favorite toy, to the reaches of space. With the use of a weather balloon and a box that housed a mounted HD camera and an old cell phone for GPS, the toy train took an hour long trip to the stratosphere and then, once the balloon burst, he then took a quick 20 minute free fall back to Earth for the father and son to retrieve 27 miles away from their original launch site. Ron added animated features to the train with Adobe After Effects, which really added another level of greatness to the video. You can watch the great video below to better understand how close the boy and the toy train are.

My 4 year old and Stanley are inseparable like Calvin and Hobbes. He’s been attached to him since he was two, and they play, sleep and do everything together. I animated Stanley’s face with After Effects and Photoshop to bring him to life how I imagine my son sees him. 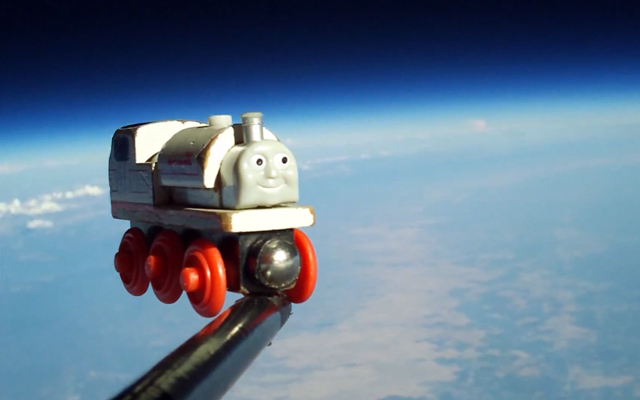