Today is the 40th anniversary of The Mother of All Demos presented by Douglas C. Engelbart on December 9th, 1968 at Fall Joint Computer Conference in San Francisco. The demo essentially gave birth to the PC, laying the groundwork for the next four decades of personal computing as well as giving a glimpse of what was to come with the internet. It featured the first public use of a computer mouse, as well as many other new innovations including dynamic file linking, object addressing, hypertext and networked audio and video conferencing.

On December 9, 1968, Douglas C. Engelbart and the group of 17 researchers working with him in the Augmentation Research Center at Stanford Research Institute in Menlo Park, CA, presented a 90-minute live public demonstration of the online system, NLS, they had been working on since 1962. The public presentation was a session in the of the Fall Joint Computer Conference held at the Convention Center in San Francisco, and it was attended by about 1,000 computer professionals. This was the public debut of the computer mouse. But the mouse was only one of many innovations demonstrated that day, including hypertext, object addressing and dynamic file linking, as well as shared-screen collaboration involving two persons at different sites communicating over a network with audio and video interface. 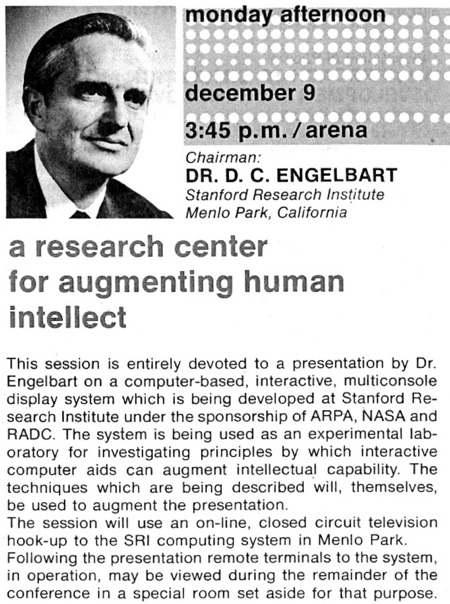