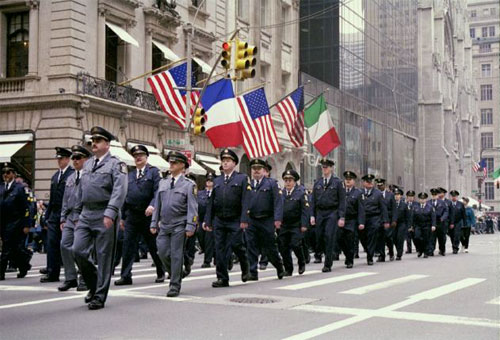 Here’s the press release we received from Joey yesterday:

The New York April Fools’ Committee is proud to announce:

The New York April Fools’ Day Parade was created in 1986 to remedy a glaring omission in the long list of New York’s annual ethnic and holiday parades. These events fail to recognize the importance of April 1st, the day designated to commemorate the perennial folly of mankind. In an attempt to bridge that gap and bring people back in touch with their inherent foolishness, the parade annually crowns a King of Fools from the parading look-alikes.

This year’s theme is “It’s not a question of if, it’s a matter of when”. The parade will memorialize war, famine, pestilence, plague, asteroids, earthquakes, volcanic eruptions, tornados, tsunamis, global warming and general impending doom. The Parade Grand Marshall will be President George W. Bush. The theme song, Sam Cooke’s “Wonderful World (Don’t Know Much About History)” will be sung in “apocalypso” style by the Dover School Board Intelligent Design Marching Band. The public is encouraged to participate, in or out of costume, with or without floats, and may join the procession at any point along the parade route. Large float entries must be at 59th Street and 5th Avenue no later than 11:30 a.m.

This year’s floats will include a Fundamentalist Noah’s Ark float featuring two of all of earth’s creatures, including dinosaurs; a Hurricane Katrina Victim’s float where for $1 a throw you can attempt to dunk Michael Brown in a vat of toxic sludge packed with snakes, rats and a big crocodile; a Last Chance Cruise Ship float offering gambling and shuffleboard, plus off-shore abortions when Roe v. Wade is overturned; and a Clandestine CIA Prison float featuring the latest prison torture techniques.

At the parade’s end in Washington Square Park a party with live music, food concessions and entertainment will feature a Public Book Burning for Oprah Winfrey’s recommended memoir “A Million Little Pieces” by James Frey. Attendees can also visit an array of fund-raising booths such as the Dick Cheney Shooting Gallery; Wayne Gretsky and Janet Jones’ Betting Parlor; the Halliburton Commercial Eavesdropping-for-Profit booth offering a “Spy on Anyone Anytime” program; and a Take-Your-Chance Petting Zoo featuring chickens, ducks & geese, sponsored by Roche, the makers of Tamiflu.

Radio personality Bill Bennett will host the Best of Racist Comments show, live from the park featuring Pat Robertson and Rush Limbaugh. As a safety precaution, no mimes or cartoon sketch artists will be allowed to participate this year.

The King or Queen of Fools will be chosen based on the loudest cheers of the crowd at Washington Square Park. The winner will reign through March 31, 2007.