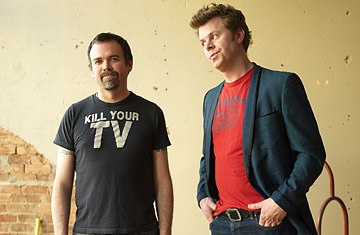 Josh Quittner recently wrote an article for Time, “The Photoshop Guys Revealed!”, unmasking the creators of the enormously popular and hilarious Photoshop tutorials “You Suck At Photoshop”. The 10 episode series on My Damn Channel was created by Matt Bledsoe and Troy Hitch (Troy does the voice of Donnie) of the creative agency Big Fat Brain, who designed the My Damn Channel website and are the guys behind the series “Tim after Tim”.

Anyway, one night, they found themselves facing a deadline, with no content. They had long nurtured an idea for a character they thought of as “the Angry Photoshop Guy.” Explained Bledsoe: “We had both been in the agency business so long that after a while we’d seen every kind of person in the advertising world.” One of those stereotypes, he said, was the “insane designer, basically. He has horrible social skills and horrible things going on in his life and the only thing he has going for him is he can out-Photoshop the guy in the cube next to him.”

“It was meant to be a one-off thing,” said Hitch. “But two weeks later, we checked into YouTube and saw that it had 50,000 page views. We went to Rob and said, ‘Hey, we might take a sabbatical from Tim after Tim.’ ” They launched the second episode of Photoshop and within five days, it had 400,000 page views. Digg dug the site, BoingBoing boinged it, and LaughingSquid inked the deal. A star was born.

Matt and Troy have just launched a sequel to YSAP, “Sn4tchbuckl3r’s Second Chance”, featuring Sn4tchbuckl3r, from Donnie’s World of Warcraft guild, a reoccurring character from the original series.