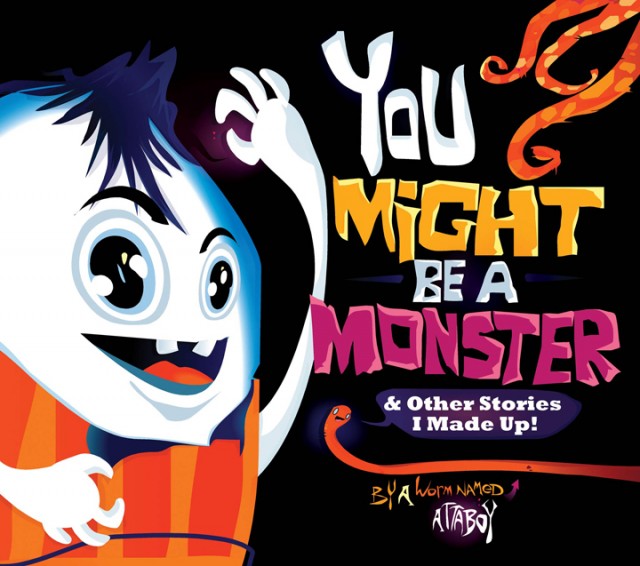 The artist Attaboy has made a name for himself with the phenomenal success of his magazine Hi Fructose magazine, which he co-founded and edits with his wife Annie Owens. He’s also a fine artist and toy designer, and his work has appeared on everything from posters to watches to stationary. (BTW, I also write for Hi Fructose, don’t say I didn’t tell ya).

His latest project is a book called You Might Be a Monster and Other Stories I Made Up. While not a “children’s book”, it is in the spirit of master story-tellers like Shel Silverstein, Dr. Seuss, and Roald Dahl all of whom wrote tales so sophisticated that sometimes kids had to explain them to their adults.

Here’s a quote from Attaboy about the book:

This is not your ordinary book. (and it hasn’t much to do with Monsters either). It will make your pee turn yellow! There’s zombie clowns, hugging cacti, sock magnets, hamster faced children, bubble gum trees, worms, and high weird morals. … It takes 18 min, to read the first half, then 4 min. to read the second half! 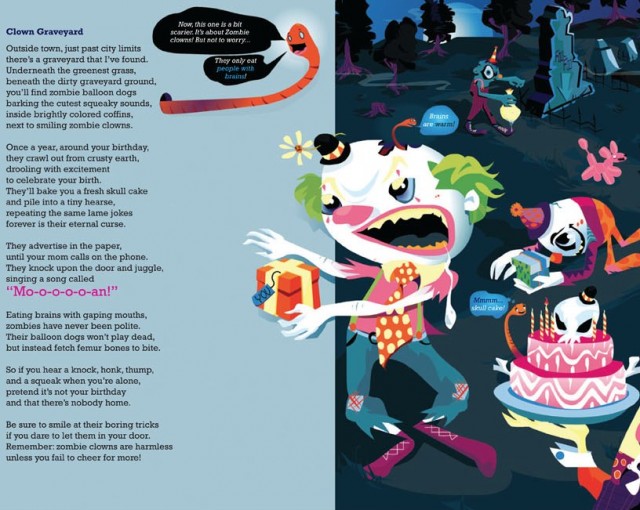 The book will be released August 1st, but both Last Gasp and Amazon are listing it for pre-order now.

Lots of people who are likeable seem to like it:

“If you like weird fun, then you’ll love this book. It’s like a candy store for your brain and eyes. A creative explosion of colorful stories, poems, and characters.”
—Liam Lynch, Director of Sarah Silverman’s “Jesus is Magic”

“Attaboy’s creepy cool monsters are an insane delight. They’ll leap off the page, squirm through your optic nerve, and haunt your brain forever. And that’s a good thing.”
—Mark Fraunfelder, founder of Boing Boing

“This book is so good it scares me!”
—Craig Yoe, former VP/Creative Director of Jim Henson’s Muppets

“What a wonderful, bizarre mess of shiny, plastic creatures in dark, gritty predicaments, This book is a welcome antidote to the tedious sameness that afflicts the world of children’s books.”
—Dave Cooper author of Bagel’s Lucky Hat

Attaboy tells us he’ll be doing readings from the book all over, starting with a bunch in Northern California and likely going cross country from coast to coast. That’s a treat because he’s always been a great live performer, doing both spoken word and as part of the band Attaboy and Burke.

Attaboy’s artwork has been licensed to Dark Horse, Kid Robot, Disney, Kiss, Sony, and many others. His animation Too Many Robots aired on the Disney Channel and can be seen on YouTube. There’s even more bio stuff than that over here.

Attaboy is also a long time friend of the Squid, and we’ve covered his artwork before including his customized Darth Vader helmet and his solo art show 2 years ago. He also created a Laughing Squid illustration in 2006, a Laughing Squid poster in 2004, and waaaaaaay back in 2000 he starred in our Tentacle Sessions living artists series. 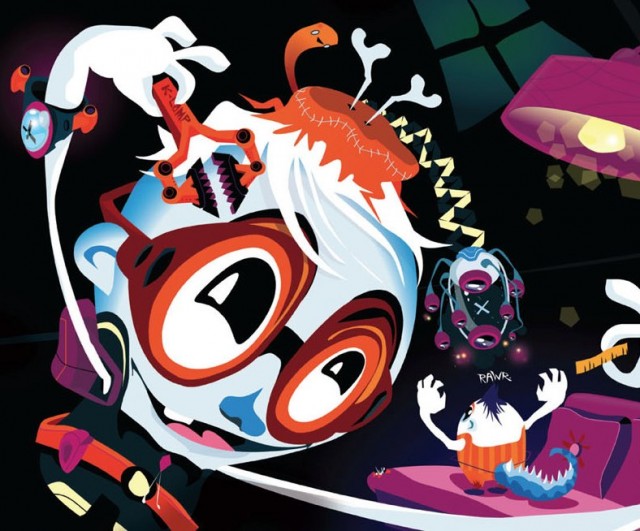